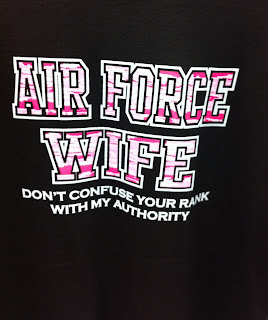 Was very sad at the BX (base exchange) did not have this tee-shirt in my size.
Posted by Kelley at 8:49 AM No comments:
Labels: life, odd events

My Reward - Their Reward

My reward for keeping the laundry going and mopping my floor was to watch the recorded new episode of "Sister Wives". Yes. I know some think I probably shouldn't watch it, but what can I say? I love seeing how other's live their lives.

In case you live in a rock or really don't pay any attention to pop culture, it's a show about a polygamist family. Mr. Kody has four wives. Amazingly enough, they come off as a normal family in many ways.

This new epsidose was how they coped with being "out". They expressed some angry over the paparazzi outside their home taking pictures (not sure why that's so different than the cameras inside the house). One wife has lost her job due to being on the show.

On one hand, I feel for them. Whether I agree with their life-stlye or not (which I do NOT!), I do understand they are following a way of life they feel God is leading them into.  And since there is no sign of abuse among the adult or children (there's 16 of them), why do I care? Why do any of us care?

But then, on the other hand - this lifestyle is against the law.  Utah defines polygamy as living with more than one women - not just one legal union. By that defintion, they are breaking the law. It doesn't matter if they knew the legal definition or not. What will the reward be for that?  Only time will tell. Right now Utah's state attorney said they have no resources to prosecute a polygamist where no abuse is suspected.   On the trailor for the next episdose, it seems the family is (or has) now moved to another state. I wonder what they legal definiton of polygmy is there - and if the family research that or not.

In the end, it'll be interesting to see how this all plays out.  Will they change public preseption of polygamy? Will laws change?  If that seems farfetched for you, just remember  - it wasn't too long ago that the mere idea of same-sex marriages to be legal in America was preposterous.
Posted by Kelley at 11:21 AM No comments:
Labels: TV shows

A nice and quiet Sunday night here. Which is so nice. Drew and I are watching CNN. My heart is heavy for Japan. I am very thankful my friends that who live there are safe. We lived in the Tokyo area for two years - our oldest was born there.  We love Japan. It's a beautiful country. I even have said (much to the dismay of our parents) that I could move back there tomorrow.   Yes, even now after the earthquake. It is a wonderful  place...hopefully the beauty that was lost will be regained.
Posted by Kelley at 8:50 PM No comments:
Labels: life, odd events

The other night Drew and I watched the movie, 2012. We actually enjoyed it. It's a end-of-the-world movie. But still. Good. The only problem I had was the actions scenes were very, very loud. The the conversation would be very soft.

But overall, the movie was worth the time.

The movie is based on the theory that the world will end December 21, 2012 because the many believe the Mayan calendar ends then - and so, will be world.

But apparently, these Mayan believers aren't the only ones thinking the world will end soon.  CNN is reporting a group of Christians are driving around the counrty warning people that the end of the world is much sooner - May 21, 2011 to be exact.

Now, I'm all for Jesus coming back. The sooner the better in my book. But just not convieced that we mere humans will be let in on the exact date.

As I was reading the article, Melissa was reading over my shoulder. "BUT!" She screams, "That means I won't be able to be a teenager!" 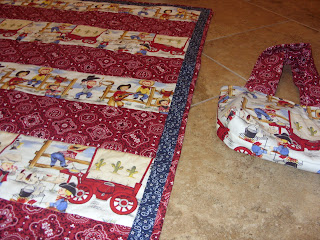 Baby quilt for Kaycee and little tote bag for sister Cheyenne. LOVED this fabric! So stinkin' cute!!
Posted by Kelley at 1:45 PM No comments:
Labels: quilting 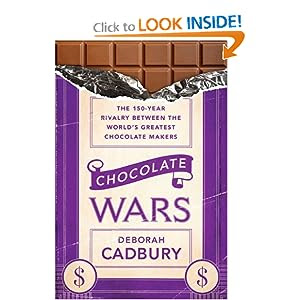 Back in November as I was driving to Dallas for a  ladies conference, I was able to listen to an interview with the author of a new book, Chocolate Wars. Deborah Cadbury is a decadent of the famed chocolate family.  She wrote the book to give a history of the family chocolate business, but also to start the conversation about the purpose of business and the making of wealth.

Her forefathers felt that a wealth making business was to profit all - the workers, society  - not just the owners of the company. Cadbury's business plan and practices were based on Quaker values.

The whole book - all 323 pages - were a fascinating read. Ms. Cadbury pinpointed the problem with many business today - they are focused on making a profit for the short-term gain of the shareholders - not the long-term benefits for the workers. So many business today are sold at enormous prices all to satisfy the shareholders - many who have only owned shares for a very short time. After the business is in the hands of the new owners, they consolidate the old with the new leaving many without jobs.

That's exactly what happened when Cadbury was bought by Kraft just last year. One Cadbury factory closed - six hundred jobs gone.  All the while the Kraft's CEO, Irene Rosenfeld, walked away with $25.5 millions in shares and options.  And the cocoa farmers in West Africa earn around $2 a day.  Many of them have never seen huge profits from all the chocolate consumed in the world.

One part of the story that fascinated me was Cadbury as well as Hershey founder, Milton Hershey, gave the majority of their wealth away. They all began trust and foundations that would receive the money in order to support those in need. Much like today's Bill Gates and Warren Buffet who both have said that excess wealth would not be inherited by their children, but instead passed on to others in need.

Too bad more people and businesses are interested in their own wealth making instead of helping their neighbor.  The would be a better place is we all lived by Quaker  - Biblical - standards.
Posted by Kelley at 1:44 PM 1 comment:
Labels: books, Jesus stuff, odd events

Throw Me Something, Mister! 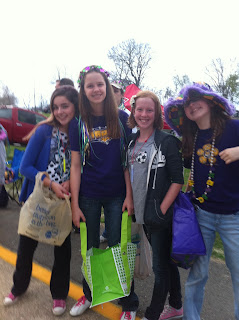 This morning I took Melissa shopping...or at least tried to. We hit three stores. Nothing. It's not like  we wanted anything usual.  Church skirts and school shorts.

Then we hit the Goodwill. We walked away with one black skirt and one white skirt.  Maybe now she'll wear something other than jeans to church.

She is still in need of school shorts.  We have school uniforms here - khaki or navy bottoms. A lot of the stores here in the late summer  & earlier fall had tons of uniforms. Now? Not so much. Which is very annoying when you have a child - or rather children! - that grow. And so, have out grown most of what we bought in the late summer.