The boys and I spent the  afternoon at the base clinic trying to get ready for school and have all their meds. (Because all the kids need Epi Pens at school, there are tons of paperwork the doctor must sign.)  It took a sweet forever. We were in with the doctor (or rather PA) for at least an hour. William, also, needed a sport physical in order to play soccer this fall and then we went over all their meds.

Yea...you know that research that says if you breastfeed the child will have less allegories?? Well....they didn't talk to my family! Poor kids. While right now both are taking less meds because it's summer, they both are prescribed several meds. William has three, but Benjamin has six plus Epi Pens and Benadryl. I really should take a picture of the BAG I left with from the pharmacy....

Oh, sweet mercy! Thankfully, we do have great medical insurance. I would hate to see how much it  would cost to get all of those meds at retail.

Then we spent probably another hour waiting for our turn at immunizations. Benjamin needed two and William needed one. When the tech ask Ben if he wanted a camo or sparkly band aide, he thought she said "camel". And thought that was a very odd band-aide, so he said sparkly. Which she thought was an odd choice for a boy. But it was more like reflective mirrors more than sparkly

When it was William's turn, he without any doubt said camo! Well....she gave him a pink camo one. She said, "Yea...I just forgot to tell you that it was pink camo!" Soooo funny, the look on his face!

He refused to let me take  a picture of him and his pink camo Band-Aid....spoil-sport.

Then we went to for haircuts and to pick up a few things from the BX. Then back to the clinic to see if the meds were ready at the pharmacy. Then to the commissary for milk, bread, and fruits, etc.

And I get to do it all over again next week with Melissa.... But hopefully, she won't need any shots nor a haircut (she actually got one on Sunday - haircut not a shot), but I'm sure I'll be out of milk and bread by then...these kids eat a lot!

We had another great visit to my in-laws' house. One of Drew's sister and family was in town -it was great to catch up with them. We stopped off at my parent's house on the way home. Earlier in the week we had planned to stay the night, but my parents were to keep both my nieces, so that left me with no bed - or sharing a small pull-out bed with Melissa. No, thank you.  But by the time we got there Friday afternoon, my nieces had a change of plans. I still elected to go home. By that point  I was ready for my bed.

Saturday we didn't have anything going on.....just rested and did a lot of nothing. Melissa did have one friend over and they baked cookies and a cake. Sunday was a little fuller. One of Ben's friends come home with us from church and stayed the night. Melissa and I had few errands - she got a trim, we hit Target and Bed, Bath & Beyond for the last of the lunch box needs before school starts.

Then late in the afternoon Melissa had a small get-to-gather with her friends.  They had been meeting most weeks for Bible study, but since school has been out everyone has been busy. Yesterday they had a short lesson then decorated sugar cookies and played a game called, "Catch Phrase." I played some to keep the teams even.  Lots of giggles! Melissa had some good and fun friends.  I hope (and pray) that it stays that way through high school.

High school - which starts for Melissa next week - she is so ready! Friday is orientation - several of the girls were talking about what to wear....clothes are still very important to teenage girls!

Part of the deal for William to get a car is for him to help with the cost.  Until he gets a job, he is our yard boy. I have to admit....he's not the best. But he's trying! And he has had help! Our neighbors are feeling sorry for him. Last week one neighbor mowed it. Yesterday one saw him pushing the mower (we have a push one -not a riding one!) and came over on his riding lawn mower and did most of the yard! William was thrilled!  It was a hot afternoon.

Today Melissa left for another camp - she will be a chaperon for the lower elementary kids. She was very excited! I'm sure she'll come home Thursday very, very tired!

I have been spending a lot of my time watching an old sermon series by Mark Driscoll on the Songs of Songs. Good stuff! Probably the best I have ever heard on this small book in the Bible. Lots of practical ideas and advice on marriage (and sex!  Yes! The Bible talks and speaks of sex in a positive way - after all, God did create it!).

Drew tried to work on our rest house, but ran into a few problems....He'll try again next week. He, also, got to visit with some of our friends from California. It seems we both are having fun without the other!

Posted by Kelley at 4:25 PM No comments:
Labels: kids, life

Drew's been gone a week and already William has had to drag out the ladder twice. Once to change a light bulb and second to replace a battery in the fire alarm. I probably could have done both, but our ceilings are high and I am not. Those few inches William has on me comes in handy!

You know that hormone that causes boys' feet to smell? Yea....it has turned on in Benjamin! oh. my. For the last two days he has been working with the youth on service projects - even slept at the church. He took off his shoes tonight and I just about had to leave the room. He did have to take a bath before we could go through his school uniforms. Even then they weren't nice smelling....I warned him that he'll probably have to take a bath again in the morning just to wash his feet. I may have to buy new shoes....I did spray Lysol on his, but still....not sure if the smell will go away.

So. yea. School uniforms.  School starts in two weeks and a day. Yesterday I ordered the last of the clothes that William and Melissa needed (yea for Old Navy uniform sales and free shipping!).  I think Ben is set with all the hand-me-downs he has. I think the only thing we are still needing is William needs a new lunch box. No real rush on that as he can always use mine - I don't see me subbing for while.

Only in the South

Melissa follows a page on facebook that's post local items for sale - sort of like a virtual yard sale. Earlier this week someone post a picture of a dead (headless) snake with the caption of "Headless rattle snake for sale. Killed at 8:15 in the freezer by 8:30. Would make a great belt!"

There was not one, not two, but THREE people that wanted it!

I can assure you, neither Melissa nor I were any of those three people.

Posted by Kelley at 2:13 PM No comments:
Labels: odd events

Benjamin had a robotic camp this week - and loved it! It was a free camp through the school and only six from each middle school were invited to attend. He was so happy when his team won the grand championship! My little scientist! Two of his best friends were also there - and that made his week, I think.  They're a good group of boys!

Melissa and William didn't do too much this week....just enjoying the summer and sleeping in when they can! We've all done a lot of reading - a few of the same books even.

Then there's Drew.... He's moved to DC. Yep - without us. At least for now.... This is not our first choice, but it's where the job is. We are still hoping for a local job as we don't want to move the kids again. We're going to give this a try and see how life goes and what God has planned.
Posted by Kelley at 9:30 PM 1 comment:
Labels: life

On the way home from church tonight we passed some neighborhood kids. I asked who they were. After Ben and his friend told me their names, Ben said, "They are....rude!"

Then his friend said, "That's his way of saying they are snobs and think they are better than us."

Oh, these boys! They make me laugh!

Posted by Kelley at 8:49 PM No comments:
Labels: kids

Our plan A for this week was to visit friends in St. Louis and one of Drew's brother's in Chicago, but all that had to be cancelled (long story for another post). Instead, we spent the 4th of July with my family. We had a nice family dinner Wednesday night, then spent the 4th at my brother's poolside (With, may I say, the BEST weather!! in the low 90's  which for the Deep South, that is downright cool!) It was so nice to relax and get some sun. Friday I met my dear friend, Janean, for breakfast then spent the afternoon shopping with Mom and Melissa. .  Today we were lazy and with no rush to return home.

The kids and I read a lot...we've all read Veronica Roth's Divergent. And all enjoyed it. It's another post-America story - just the thought of that creeps some people out. This story was not nearly as disturbing as Hunger Games. We are on the waiting list for the library for the next book in this series - we are ready for it! The third book is due out this fall.

I've, also, spent the week avoiding washing many dishes. Apparently, you get out of dish duty when you have stitches in one of your fingers. I got a little too carried away last Saturday with my rotary cutter when I was trimming fabric for a quilt. While the cut and stitches did not hurt today (b/c it REALLY did last Saturday!!!), the stitches just got in my way. I was told to keep them in seven to nine days. Today was day seven. Couldn't stand it anymore, and so I took them out myself this morning.

Then too a nice long shower.

Not the best idea.

Should have done the shower first....with the stitches in a water-proof covering.....The cut did open back up, but I'm not going back in. If I end up with a nasty scar, oh, well. It's on the tip of my finger. Who cares.

I did have to get a tetanus shot. I was not happy about that. I had one eight years ago, but the doctor sort of ignored that. I think he just want to charge my insurance company for another item

I'm meeting a friend for breakfast this morning. She's late. But hey! At least I get to enjoy the coffee while I wait.  I love IHOP... 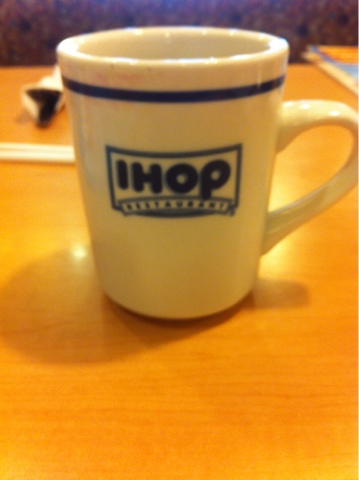