Breaking Out the Sewing Machine

Yesterday Melissa was bored. The two girls that she hung out with most of last summer are no longer talking to her (she's still not sure why - but that's another post for another time). So, she started to look at dresses on the internet and that lead to looking at purses.

Such a girl thing.

She found a purse that she really liked & that had a pattern. Luckily for her, she has a mother with a stash of fabric.

A few hours later, she had a new purse. So cute! While I helped in a few places, she did the work. She's getting better & better! 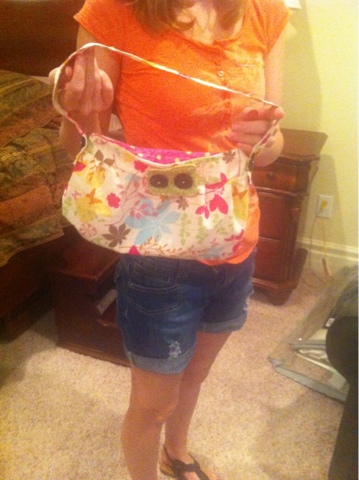 When you ask Benjamin when his birthday is, he gives you the correct answer.

When you ask Benjamin when William's birthday is, he gives you the correct answer.

When you ask Benjamin when Melissa's birthday is, he gives you the correct answer.

When you ask Benjamin when Drew's
birthday is, he gives you the correct answer.

When you ask Benjamin when my birthday is, he gives you the WRONG answer. Every. Time.

Posted by Kelley at 8:56 PM No comments:

Last week the kids and I spent on the coast enjoying the cooler temperatures and the beach. Very nice. I do miss the beach.....one of the best things about living on a tropical island was the beaches.  But, hopefully, the next time I go Drew will come along as well instead of having to work.

About Tuesday my van started to make a noise....admittedly, I ignored it for a few days.  Yes, I love to bury my head in the sand.  I finally got my father-in-law to look into it. We both thought the sound stopped when I turned off the  A/C. I felt like I could make it back home without any trouble.

And I did. Thank the good Lord.

Drew took the van in this morning. Yea. Not the A/C. At first they said it was a belt and pulley - could be fixed for $300.  Not too bad - could be worse.

Then they called back and said it was worse.  Now the price is closer to three times that amount. Hopefully, they won't be calling back with another "worse" problem.

One of our goals as parents is to instill a sense of respect for money into our children. For many years now we have given them an allowance with the purpose to help them to learn to how spend and save  it wisely. William and Benjamin has really shown a desire to save. Melissa? Yea...not so much...more like a hole is in her pocket.

At any point in time, William usually has more many than any of the three.  He has bought one large item since in the last few years - a portable video game devise (a DSi), but mostly saves. He talks about buying a lap-top and even though he probably has enough money between his bank savings account and what is in his wallet, he has yet to do the research and pick one out. He, also, has the greatest opportunity to make money as he is old enough and big enough to mow the grass for us at times.

Benjamin, also, has had one large purchase - a portable video game devise as well (but one different than William's, I think). He enjoys buying "Poke-mon" cards...so much so that we now do not let him buy any more.  He has plenty! And the fact that he doesn't really play with them all that much any more.

Then there's Melissa....yea....I guess it's the girl in her.  There's so much to buy!! Clothes! Jewelry! Clothes! Make-up! Clothes! Did I say clothes?? CLOTHES!  Yes, she's the girly-girl that wants  it all.

Last week William and Melissa went church camp -and had a ball, I might add!  William accidentally left his wallet at home, so all he had was the $20 I gave him for meals traveling to and from camp. He spent it all on food and  entrance in to some type of water-slide thing, but said even if he had his wallet (with probably over a $100) he didn't see anything else he wanted. But  Melissa? She went through all her money. The $20 I gave her for food as well as I think $30/35 of her own money.  She bought a shirt, snacks, entrance to the water-slide thing...oh, she had fun!

Saturday she was slightly ill and spent most of the day in bed, but Sunday after church when she was all better? She was looking around the house looking for ways to make money for our vacation next week.  So far she has done seven loads of laundry, dusted the base-boards, cleaned off all the doors in the house (lots of scuff marks are now gone! - yea! that makes ME very happy!), and she even mowed some of the yard and used the electric blower to blow off the driveway. She even got to baby-sit the little boy across the street for a little while last night.

Her little nest egg is growing.  But I'm interested in seeing how she spends the money next week....will she be a little more discerning over what she buys or will she give in to immediate gratification and buys the first things she sees??

One of the things I have grown to love about my iphone is the ability to download and listen to a  "podcast". (Just think - five or so years ago the word "podcast" probably didn't even exist!)The other day I was browsing through the list of podcasts and came across one call "Stuff Catholics Should Know: Gossip". For some reason it attracted my attention and I listened - and LOVE IT!

(No, I'm not Catholic, but enjoy learning about it.)

For the first time I heard someone really break down and give a good definition to gossip. Through out the years I have struggled to come up with a  good simple definition - I usually know when I hear gossip that what ever is being said is gossip, but have had a hard time explaining it in words.

That's the one I love! We all know lies about a person is gossip, but what about things that are true? One definition a few years ago was something along the lines of "words that you won't say in front of a person, but saying it behind their back." Which is true, but I really like this new one - if it hurts their reputation, then is it's gossip.

Simpler, I  think. And I have to admit - convicting.
Posted by Kelley at 1:04 PM No comments:
Labels: Jesus stuff

No, the Other One

This is VBS week at our church. I had really planned not to teach, but I have a hard time saying no! The good news is that I'm teaching preschool games, so I only have four 15 minute classes over two hours.  I can arrive late, teach, then leave early. I really like that part.

The other part I like are my helpers.  My kids. All three of them.  It's fun seeing how they interact with younger children - which, by the way, they all do really well. (I think Ben enjoys it because there's people smaller than him and for once he can be a big kid and be in charge!)

As a student just completed fifth grade, Benjamin is suppose to be actually in a class, but we are the bad parents and have given in and not making him.  He figured out a while ago that VBS is mainly for the un-churched, the unsaved child. Which he is not. So. He is helping me along with Melissa and William. Last year he did not  attend either because he had the chicken pox - yes, he had the vaccine...and this was actually his second case. My children can be over-achievers, you know. (At one point yesterday, he was complaining about something and I did threatened him to take him to the fifth grade class.  He got over whatever it was and was good as gold from then on!)

Over all our four classes were great - we just played a hula-hoop game. One classes was large at 21 four years old - WOW! Those teachers have their work cut out for them!  Several didn't want to play, one asked about the video games, another was ready for the food! Towards the end Melissa came up to me and said, "The one in the white shirt just called the one in the orange shirt the "b" word."

I just looked at her and said, "What? Butt?"

Okay, then! Well now!  Oh, the things they learn at VBS.....can I say again how much I'm glad I'm not stuck in THAT class ALL morning ALL week??!!!
Posted by Kelley at 8:54 AM No comments:
Labels: Jesus stuff, kids, life, odd events
Newer Posts Older Posts Home
Subscribe to: Posts (Atom)