This is my Bonus Year with Melissa.  Most of the kids in her preschool class (at church b/c she didn't really go to real preschool) are going off to college this fall.  At that time we were living in Virginia the cut-off date for entering school was Melissa's birthday.  I never wanted her to be the youngest in her class.

I did toy with the idea of letting her go to kindergarten that year, then have her re-do kinder the next year in our new location after we moved.  But the school district that year made kindergarten full day in stead of half day. She just wasn't ready to be gone all day. And neither was her momma. So, that year she and Ben went to a  little mom's day out once a week and played with me the rest of the time. It was a good year.

Now, here, we are just a few weeks before her eighteenth birthday and starting her senior year while other long time friends go off to college.  But I am so okay with that.  I have never doubted the decision to wait to start school...she just needed more time...there really was no rush.

She has really thrived over the years being the oldest instead of the youngest in her class. And I think having those extra months in age and maturity has helped her as we have moved every few years.

This senior year she planned to do some great things...but already some thing did not work out.  She has really enjoyed being on student council in high school, but she found out tonight she lost the election and would not be student body vice president.  Nor would she be a representative either....sadly.  The school changed the teacher sponsors and they changed how a few things worked.  In the past if you lost the election, then you could be a class representative. But this year this is one of the rule they new teachers have changed. If you lose your election, then you out of luck - and will have no part of stu-co - even if you had in the past , even if you had already put in several volunteer hours for different things.

Melissa was oh-so disappointed. I'm sure she'll find other things to fill her time....but right now it's feeling a little raw.   I am looking forward to seeing what my "bonus year" will bring her way....I have no doubt that the Lord has a great year planned her for.
Posted by Kelley at 9:44 PM No comments:
Labels: kids, odd events, our new life

Life is such a roller-coaster at times. In the last week or so we have rejoiced as deployments have ended for friends and with a family as they finally were able to meet their new son through adoption. But tonight I  have such a heavy heart tonight as I see friends walking the road of loss.
Some are facing divorce ...a few totally blindsided....others by mutual agreements....some just tried of fighting to be their spouses one and only.... Each couple have such a different story, but each has heartache. All have children...I wonder the effects that will visit each of these.
Some friends are facing the loss of a parent in the near future...others dealing with ill children.
Then I look at the news headlines. So depressing. I don't think CNN had one positive story in their news feed tonight.
Good thing we have been told how the story ends...I know good is in the future. But at these times I think the only thing to say is "come, Lord Jesus, come."
Posted by Kelley at 9:09 PM No comments:
Labels: life

Today ends the second week of school and so far both are doing well. Melissa will have an easy senior year with her only hard class is AP English. She is taking a class at the local Vo-Tech that involves learning business and life skills such as writing a resume.  The rest of the day she has a job working at the middle school office.  And is very happy!!  Next semester she'll have a typing class, so it'll get even easier!

Benjamin on the other hand has a tough load this year. Right now he has pre-AP English, Trig, pre-AP Biology, and Spanish 1.  After meeting his teachers, we decided he probably won't learn anything in Spanish...yea....that teacher is not a winner...  But we did like his other three teachers.  His English teacher is one the other two have had and we just love her! She goes to our church and is in charge of the spring school play. Ben will be learning in there!  His biology teacher goes to our church as well and we think a lot of her and her family. I have had two of her kids in my new believer's class at church.  Of course, being an Ole Miss Alumni helps!  His trig teacher is a Cajun - full-on accent and everything! He's new to the school, but seems to know his math....just hoping he'll be able to pass on that math knowledge in a way Benjamin can understand.

William right now is in a computer/video marathon.... Recovering from his six weeks of being a camp counselor (and computer/video-less)  He really seemed to have enjoyed his time at the camp. He's opened to doing it again next summer, but hasn't made up his mind.  Drew and I would like him to work the full 12 weeks of summer or get an internship in his field of study. He has awhile before he has to decide.  He moves back to school Labor Day...he'll be ready to get back into a normal routine, I'm sure.

The rain...yea....we're getting lots of it!  So far around our house and area, the rain  hasn't caused any flooding.  Of course, in the south part of the state, that's not the story. Yesterday we got a really bad storm and lots and lots of water! The ditches on our street were near full, we had a nice moat around the house (again) and one neighbor's driveway was covered in about 6-8 inches of water. But when the rain slowed down and then stopped, the water drained into the nearby lake without causing any issues. It looks like rain will continue on and off until Tuesday....hopefully, we'll see the sun again before then.

Work for Drew and I both is going well. Both of us are getting some projects done and off our desks.  Last week Drew was working in the Dallas/Fort Worth area.  I sneaked off and stay over with him for two nights. We were able to catch up with one of his brothers and a friend from college.  As much as I love my children, it's nice to just be Kelley and Drew for a few hours instead of Mom and Dad.  He'll be off again next week - this time to DC....wish I could join him there! I did so enjoy my time in DC last month....just wished it could have been longer and had been able to see a few more friends in the area.

We do have few trips planned for this fall....trying to get a few football games in, but not sure if Ole Miss will be in the mix...the calendar is already getting full.


Posted by Kelley at 10:51 AM No comments:
Labels: college life, family, kids, life

Several years ago when William was learning to drive, he backed into a lamppost late one night on our way to DC for Thanksgiving. I was not very happy with him to say the least. He just calmly said, 'Mom, I was just adding character to your van'
Hmmmm. Yea. I could do without that.
Thankfully, my father-in-law was able to show the boy how to get the mark of black paint off my van. And somehow, I survived him and Melissa learning to drive.
And now it's Benjamin's turn. For the first few months I just refused to ride with him. My nerves just couldn't handle it. So, Drew took over the teaching. As with the others he is getting better every time he drives.
Yesterday Benjamin and I had several errands to do to prepare for school starting on Monday. I knew he had not driven in well over a week, so I made him my chauffeur. 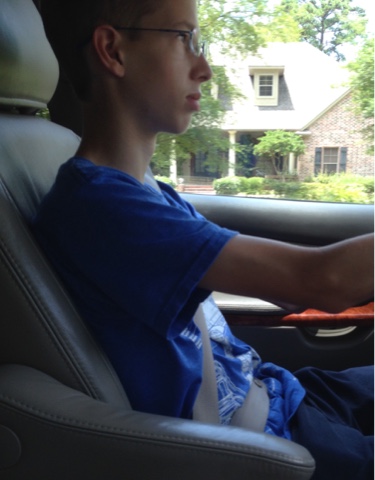 Overall, he did well. I did make him let me drive at one point because he needed to back out of a tight spot at a strip mall. With a large truck on one side and an SUV on the other and not a lot of room behind us, I just didn't trust him to back out without hitting something.
I think it hurt his feelings....oh. Well. Better than hurting another car!
Then we headed home. And he drove into our garage. And was looking at the wrong corner of the car. I yelled, "You're gonna hit the house! STOP!"
Too late. 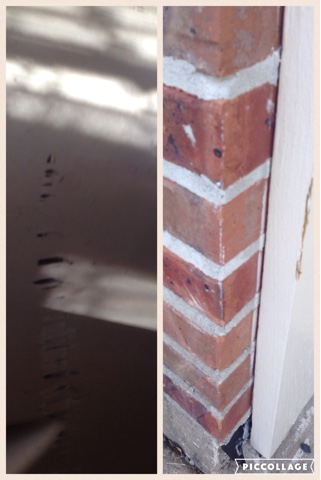 But today he learned how to sand and repaint wood. And those marks on the front of the van? Not paint like his brother added. On, no. Not that easy. That's the metal under the paint. We'll be painting that soon as well.
I guess now we're adding character to Benjamin.
Posted by Kelley at 4:56 PM No comments:
Labels: kids, odd events, pictures
Newer Posts Older Posts Home
Subscribe to: Posts (Atom)