The highligts of our trip so far:

William almost ran over two fools walking along the side of the road while their car blocked our lane. (He got to hear me yell 'STOP' very loudly.)

I ran over a skunk in west Mississippi....the a rabbit in east Alabama. Good thing the kids are older...otherwise they may had been scarred for life.

I almost hit a car in my blind spot. Good thing he saw me and slowed down.

I got to visit one of my college roommates. Oh, how I love visiting Jenny & family!! So worth taking the long way! It was just too short of a visit. Need to plan a longer one. Out kids get along so well! Miss them.

William decided the van needed 'character'. It now sports some black marks where the van and a light pole kissed. Wonder what Drew will say....

I've been searching the AM radio stations for college football scores. Hope my Rebels get their act together & win like those tigers did today.

I'm tired of being in the car...glad William can help drive...even if  he's still learning. And very glad Jesus is watching out for us tonight...almost to my husband.
Posted by Kelley at 7:26 PM No comments:
Labels: life, vacation

Commissary
BX
Clinic (which included five different offices...but totally forgot one office...urrrh)
Back to BX
Back to clinic to pick up meds
Back to commissary for that one item I need that I forgot.
Walgreens to get what the BX & commissary didn't have.
Family Dollar to get the item Melissa needs to school tomorrow that I didn't know about until AFTER I left the commissary
Home
I don't know about you, but I'm tired. PJ's have never felt so good.
Posted by Kelley at 4:34 PM No comments:
Labels: life

As I said the other day, Monday I was NOT in a good mood - just not ready for Drew to get gone again.  On Tuesday I was not in any better mood....especially after Drew told me he got the official offer for the local job. While it was great news that the offer came in, we were very disappointed that start date is late January. We were hoping - praying - that it would be in December.

We are very ready to have our family in one location.

At the beginning of service on Sunday, the worship leader asked for prayer for a lady in our church that was served divorce papers on Saturday - totally out of the blue for her.  Later in the service my friend Jennifer, who is enduring a year deployment with her husband leaned over and said, "In a year this will be over for us- but for that lady -it'll never be over."

While I was in a bad mood Monday with Drew leaving then Tuesday with this late date, I remembered this thought of Jennifer's mid-Tuesday afternoon - and yea.  Life could be worse.

Posted by Kelley at 9:21 PM No comments:
Labels: family, life, our new life

The classroom I had today was in a 't-building.' You know the ones....bought for temporary use, but never leaves? It also means colder in the winter & hotter in the summer.  While the calendar says it's still fall with a wake-up temperature of 28, it felt like winter here in the Deep South. So, I did what any Southern lady would do: turn the heat up. On high.
By the end of the day, the students were complaining. Oh, well. I was warm...nice & toasty.
Just the way I like it!
Posted by Kelley at 2:01 PM No comments:
Labels: Subbing

Surprising the Kids with a Daddy Weekend

Drew and I knew that it would be a long 38 days between our visit in Memphis and our planned visit Thanksgiving week, so he planned to come home this past weekend. I decided not to tell the kids to see if I could surprise them. Which I did! It was fun seeing their faces! Melissa - the Prickly Pear Herself - let Dad give her a long hug. I think she misses him....not that she would admit it...but she doe.s  William was totally thrilled! He gave his daddy like a five minute hug! So sweet! Benjamin was excited as well. He had asked earlier in the day to stay over at a friend's house, and was greatly upset when I said no.  He couldn't understand why and let me know it!  But after seeing his daddy, he understood that I had a reason....he just needed to trust me!

Saturday was filled with watching the Ole Miss game, errands, a few chores that only a husband thinks about doing, and a nice diner out. Sunday was church, a nap, Benjamin's induction ceremony to National Jr Honor Society, and a trip to the State Fair.

The State Fair honored all Veteran's with free admittance  which is really the only time we'll go - it's DANG expensive!!  And we really aren't fair people.  The praise band from our church played at five o'clock.  It was a great time - sitting outside listening to great music. Miss those kinds of times with Drew. To top off the evening  we had red velvet funnel cake...wow....what a great creation. So yummy!

Then came this morning. Hated taking Drew back to the airport and seeing him leave again. I really hadn't had any bad days since he left in July. Oh, there's been times when I wished he was there to see the kids do something or times when I just wanted him around, but not days when I was depressed. Until today.

Drew and I both think he'll be able to move home within the next month or two, so it's not like we're still have an open-end date, but we're ready to have our family one in location again.

The class I worked in today will be reading and working through A Christmas Carol beginning next week.  To induced the idea of ghost, today I showed the reality TV show Ghost Hunters.  I had never seen this show before - I knew there were several shows on TV concerning ghost, but never had the desire to watch one.

And today I got to watch it six times.

The first class was the only one where just about every student said they did NOT believe in ghost. Oh, I'm sure at least one student did, but after one of the popular boys said, "I only believe in the Holy Ghost!!" they kept quiet, I'm sure.  All the other classes lend more toward believing in ghost. Many had  "stories". A few I think were flat out making up stories - several do being the center of attention.  Others stories seem to be just a child's imagination.

One class was just awful. AWFUL!!!  Way too many students.....several with attitudes...but they did find out that I can have an attitude as well!

Posted by Kelley at 9:04 PM No comments:
Labels: working

Yes, that was me at Wal-Mart in sweats today. Thankfully, Stacy & Clinton from 'What Not to Wear' were nowhere around. But after taking my migraine meds at six in the morning, sweats by mid-morning was an improvement.
Hopefully, there be no more migraines this week - or me wearing sweats any where outside the house.
Posted by Kelley at 7:31 PM No comments:
Labels: life

Today I subbed in the special education department.  I truly worry about several of the students I was assigned. Right now they have parents that care for them, but what's going to happen to them when their parents pass away? I hope they have other family members that will step up and will take care of them.  Otherwise, I fear they will be homeless. I just don't see them being able to take care of all those goes into running a household....buying and preparing food, paying bills, doing repairs or arranging for workers, cleaning...  They are just like lost little puppy dogs.....it's very sad to me.

There's a few other students that have the potential to be violent, I think. I hope I'm wrong.  They just seem to get very frustrated very fast.  When I'm working with them, I try to really listen to them....that seems to help.

I have come to the conclusion that I could not work with them on a daily basis.  I just don't think I have the patience.
Posted by Kelley at 7:38 PM No comments:
Labels: working

Friday we celebrate Benjamin's thirteenth birthday. I think he had a good day - even if he had to go to school! Since this was his thirteenth, it was a year he had a party with his friends.  We had six of his friends over for pizza and cake. Then we went to the opening night of the movie Ender's Game.  It's another youth fiction book brought to the big screen, so most of the boys had read the book.   Overall, I think everyone had a good time....just was missing Drew!

As our tradition, Benjamin got to request the type of cake he wanted. He asked for a cinnamon roll cake.  Hmmm....okay. I had to search for a recipe, but I found one. It was really easy - just make a basic cake recipe, pour it in a baking pan, then pour a mixture of melted butter, sugar, and cinnamon over it and bake. During serving you pour icing over it as well.  After Ben took his first bite, he dropped his fork and gave me a big long hug.

The boy next to him closed his eyes and stopped talking as he ate his first bite -yea....he liked it as well. Two other boys did the same, but added, "Can you be my mommy???!!!"

Funny, kids!  So, yea. The un-usual cake was a big hit!  Ben's already asked for it next year. 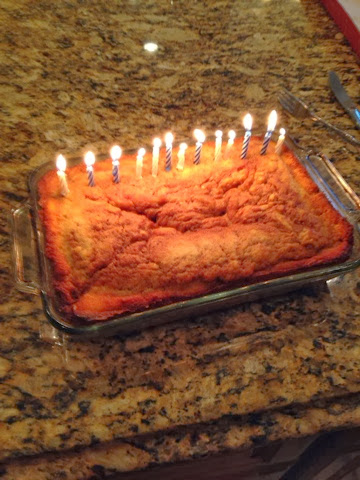 (The pictures of Benjamin and his friends are on my camera - this is the only one I took on my phone. I'll try to download and post those soon.)
Benjamin turning thirteen made me think of William turning thirteen....which you can read about here.
Posted by Kelley at 5:36 PM No comments:
Labels: birthdays, pictures
Newer Posts Older Posts Home
Subscribe to: Posts (Atom)