Usually I have Benjamin conversations to share, but today in honor of Melissa's birthday, here's a conversation with her.

She was watching a new tv show the other day. The premise was a group of security experts trying to settle some security issue of great importance.  She stopped the show then said to me, "That's what I want to do!! I want to be a security expert!!"

I said, "Ok" (This is an on-going conversations in this house with her...yea...she really has no idea what she want to do with her life...well...other than win Survivor, that is...)  Then I said, "Dad has his master's in security management."

She was shocked!  I had no idea she didn't know this....it's not like we were trying to hide it, but I guess it's just never come up in any of our daily conversations.

After the shock wore off, she said, "You know....I feel surprisingly more safe and secure."

Posted by Kelley at 4:02 PM No comments:
Labels: kids, life

As we were coming home from soccer the other day, Benjamin told me that he had spoken at one a meeting with one of the Christian groups at school that day during lunch.  I asked him what he had spoken on, and he replied that they had given him an outline and it was on prayer.

I said, good. Prayer is good...in fact I had recently dug up an old prayer chart that had a character trait to pray for every day.  The day before was kindness and that day was generosity.

Then Ben said, "Give me a dollar."

Ben: "Well, you said you were praying to be more generous, so be generous and give me dollar."

Posted by Kelley at 2:21 PM No comments:
Labels: kids, life

While it maybe the end of summer with fall coming soon, I've been into tulips. They are one of my favorite flowers and couldn't resist when I found a tulip quilt pattern. I ended up making two table runners (which are gifts) and two mini quilts (which one is a gift). 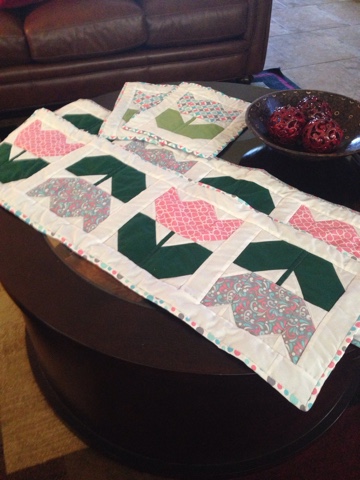 Posted by Kelley at 9:47 AM No comments:
Labels: Quilts

Friday I took William to college - and as normal in this life: I did it by myself.  Yep.  Drew was traveling. The original plan was for leave after Drew returned at noon, but the college changed the check in times from 1-4 to 9-1.  There was just no way for Drew to get there in time. So. Just me.

When we got there, the parking was crazy full! We finally parked at the end of a row that was marked with red lines for a fire truck. I didn't think they would be towing people on check in day, so, we went with it.

We got there around 10:30-45ish and were the last of the four roommates there.  William was upgraded from a normal dorm room to an on-campus apartment that has four private bedrooms, two bathrooms, and a small kitchenette. Two of the room mates are from the Houston area and have known each other all their lives - their parents all went to college together. They took the two upstairs bedrooms.  One is an engineering major and the other is finance.  The other roommate is from Arkansas and is, also, engineering.  The Arkansas boy seemed quiet like William - the Texas boys were more outgoing.  All the parent seemed nice.

Within a short time we got everything unload from William's car - with the help of the Texas boys and their fathers. William really didn't have a lot of stuff....we didn't buy him a microwave or refrigerator as the apartment came with those.  We decided NOT to buy him a tv as he can watch a lot of things through his laptop.  The Texas boys brought a very large tv and sat it up in the common area, so I was very glad we didn't buy a tv.

I didn't stay very long....just long enough to help William make his bed....unpack his things...have lunch.  Then I left.  I really didn't feel like I left him at college, because I knew I would see him the next day as we had tickets to the football game.

But leaving him after the football game? Now that's when I felt like I left my son at college!

He told us before the game that he and the room mates hung out a little Friday night - found some of the free food one of the campus groups were offering. While they were at the event, William ran into some high school friends and they all ended up going to one of the Christian groups facilities and playing games.  Sounded like a good first night at college to me!

His classes doesn't start until Thursday, but the school  and different groups have lots of things planned to keep the students busy - especially the new freshman students. I'm sure they'll have fun!  William just needs to pick up one more book from the bookstore, but is set for his classes.  This quarter he's taking two seminar classes, an English class, and a Calculus class...all of the classes are mid-morning to early afternoon times...I think it's a good starting schedule.

He's excited, I think....not that he shows  a lot of emotions! But he's right where he's suppose to be.