Late Thursday William made it home from his week at orientation at the camp he'll be working at later this summer. Over the weekend I was doing some of his laundry and saw some underwear that I didn't recognized.  When I asked  him about it, he said, "Yeah, I bought them."

"Why? I thought you had plenty."

Him: "Well, I didn't have enough to last me a full two weeks until I did laundry."

Like other males in my family, he bought new instead of cleaning.

Last Friday Melissa had a doctor's appointment for a physical for a summer camp she's attending this year.  As we were getting out of the car, she tried to give me her military ID - which is required for her to be seen at our base clinic.

Her: "Mommmm, quite making me do adult things!"

Me (last week): Hey, Ben - next Tuesday night you're going with me to Melissa's graduation from BYL (a youth leadership program she was selected to participate in this school year).
Benjamin: Ok
Me: Then on Thursday you'll go with me to her Ring Ding.
Benjamin: NO!! Not Ring Ding!! Why do I have to go!!?
Me: Because Dad's leaving town and I don't want to go by myself!
Benjamin: Then take William!!
Me: He's at college.
Benjamin: But I don't want to go!!!
Me: Well, neither do I and I'm not suffering alone! You're going.
Benjamin: urggggg
Such are normal conversations around here. The ceremony tonight was nice - even came with a dinner (picture below ....would have been more pictures but my phone died shortly after we got there & when I picked up to use my real camera I realized Melissa forgot to put the memory card back in it.)
Hopefully, we'll survive Ring Ding on Thursday.
We never heard of Ring Ding until we moved here. All the kids declared it as stupid. But Miss Social Butterfly doesn't want to miss an opportunity to dress up and see friends. So. We're going...it is intetesting how Drew plans his trips....and misses some of this 'fun'. 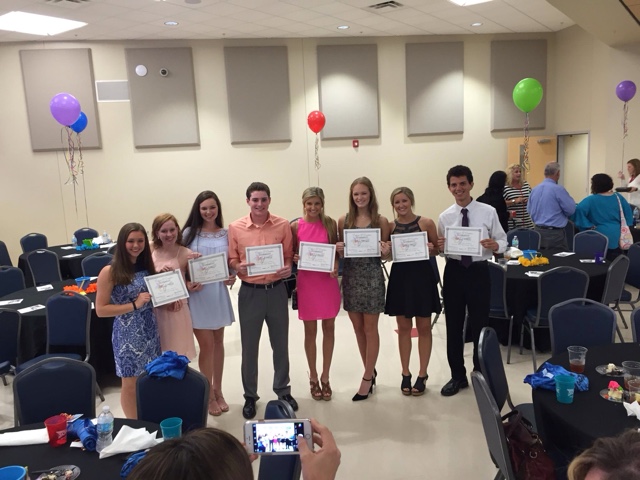