Last week I made aprons for a friend. Her daughter wants to make mommy and daughter cooking videos where they are dressed as Belle in the beginning of Beauty and the Beast. I was concerned that the mom's apron was too big and the daughter's was too small, but my friend was very happy with the end results. When my friend gave them to her daughter, the little girl ran to get a book like Belle has in the movie. 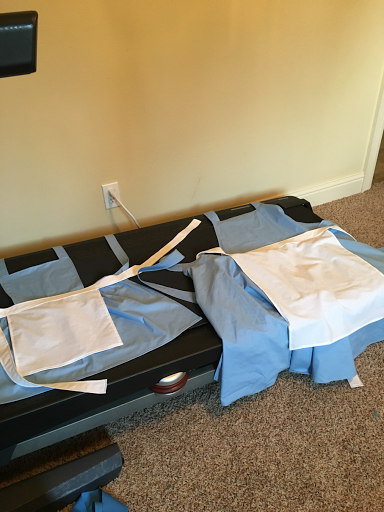 This week I did the alterations to the Tin Man's costume for the school play. While I hemmed and added some darts, etc, the iron made the biggest difference.

The other day I was telling Melissa about a new TLC tv show.  It's called "Meet the Putmans". It's about a family that has decided to life a little differently than the rest of us.  They have four adult children whom all are married with children. And they all live together. As in live together in one house.

One house...two bathrooms....only one washer and dryer....for 25 people.  Ten adults and fifteen children.   There is one daughter in this mix, and her husband decided to take HER name instead of her changing her name so their kids would have the same last name as their cousins.  Yep. That's very different from our normal American life.

The Putmans vote on just about everything...from design options to the house they are building (which will have more than two bathrooms for all those people) to whether or not the daughter and her husband can move away so they will be closer to the husband's work.

When I was telling my co-workers about it, they, also, thought it was weird as well.  One said it sounded like a cult.  Maybe so.

Melissa asked me why. I told her they said it's because they love each other that much.  Melissa's comment?

So.  Benjamin's not the only one who tells it like it is!!

Oh, that Benjamin. He does make me laugh. Last Tuesday Benjamin went to the dentist and did not get the best report on his gums. In order to help his gums they gave him an antibiotic that he gargles with for two weeks.
This afternoon I asked him how it tasted. His answer?
"I feel like I'm chocking on acid."