What a Pretty Bird!

When I asked the kids what they wanted to eat for Christmas, Benjamin and Melissa had no opinion. But William wanted duck.  Now, just to be clear, this has NOTHING to do with any bearded guys from my hometown.  This all has to do with Christmas 2006.

In December 2006 we were still recovering from the year deployment. While Drew came home that August, December found us still just relishing in being a whole family again. We were just loving being together.  That Christmas we stayed in Maryland instead of traveling to Mississippi to see family. For Christmas dinner we had several of my friends over for lunch since their husbands were working.  Not sure why Drew wanted to serve duck that year, but he did so we did.  This memory has stuck in William's mind all these years and he wanted duck again.

So, I bought a duck.  After talking to mom and realizing that we would have way too much meat if we brought the duck for dinner at her house Christmas Day, we saved it to cook here at the house. The other night, Drew got to work and cooked the duck.

Over all, the consensus was delicious! Melissa thought it was too "gamey" - but not sure if she really knew what gamey taste like. But the boys and I all enjoyed it. So glad my other half is home to help me cook! 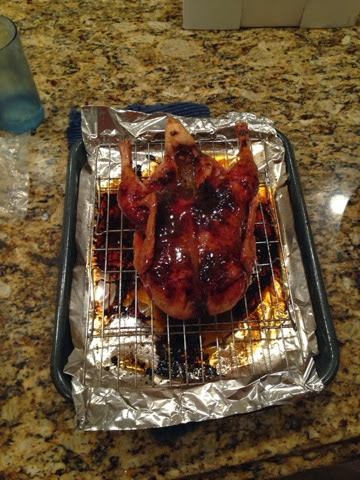 Posted by Kelley at 1:11 PM No comments:
Labels: family, pictures

When we moved into this house, we got our king size bed back. Oh, how we missed it while it was in storage for the three years we were in Guam. We did not buy a new comforter - after all, after not seeing it for three years it seemed new all over again.
But after awhile Drew started to complained that the comforter was too hot. We started looking for a new one that was lighter and in a color and design we could agree on. It took awhile but late summer we finally found one we could agree on. 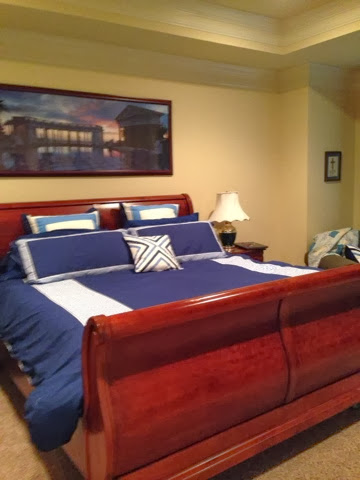 It's very close to one I fell in live with before we left for Guam. Which of course, I couldn't find now that I was  seriously looking.
Then it was time to hang the matching curtains...and decide on a curtain rod. Why in the world these little choices in life drive me crazy, I don't know. But they do. Thankfully, Drew is not so incline to be batty and indecisive. Saturday he drove around town buying all the parts, because one store just can't have it all in stock!!! Sunday he pulled out the ladder and drill and got it done!!
I'm happy. 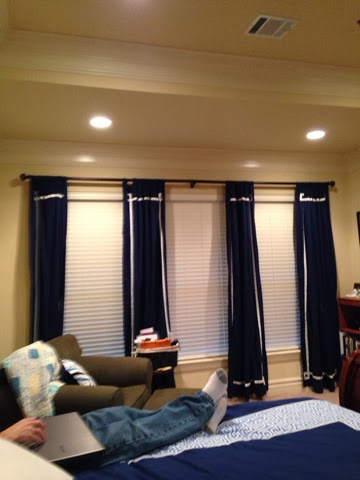 Posted by Kelley at 7:41 PM No comments:
Labels: life

Saturday we slept in...so nice to have Drew back where he belongs! The whole family went out to lunch over in Shreveport to Twisted Root Burger Company. Drew had heard of it on Diners, Drive-ins & Dives. The original is on Dallas, but have opened one over across the river from us.
It was good!! The restaurant itself has lots of character...and very good ice tea!!
The we went to the RW Norton Gallery. We looked around for awhile. This is the second or so time for Melissa and me, but the first time for the boys. It's a small gallery, but a wide range if art.
At two o'clock there was a Christmas concert by the Little Theater. The theme was Christmas on Broadway, so all the songs were secular. But they did a great job!!
Ben...though....was a little bored....trying to get some cultural into this boy! He found a corner to sit in...and sleep.....  But my big boys seem to enjoy the music! I think we're ready for Christmas!! 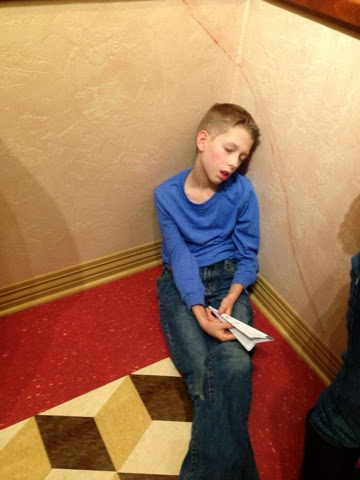 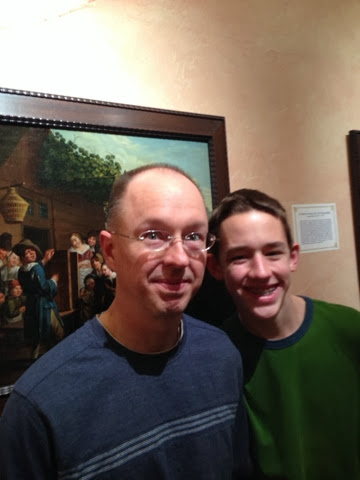 Drew will be home for Christmas in less than 24 hours. I am so ready! It's been a rough week. Granted, a lot of my stress I brought on myself.  But don't we all at Christmas?? There's been a few parenting challenges, a long to-do list, several working days, and soccer games.

But....this week is almost over. I still have a few things to do in the morning, but I have some relaxing plans for the afternoon. THEN!!!! I get to go to the airport and get my other half.

Posted by Kelley at 9:33 PM No comments:
Labels: life

Benjamin is known for getting some words mixed up. He doesn't go it on purpose, but it just makes the rest of us laugh - much to his dismay.
Last week when he was home sick, he was watching the news. At one point I walked in and Ben said, "Mom! The Pope was a bumper!!"
Me: A what??
Ben: A bumper
Me: A bumper? As in....what?
Ben: I think a bar. It was on the news!
Me: Do you mean a bouncer???
Ben: I don't know.  I guess.
Me: A bouncer is a person in a bar that stands at the door & let's people in and also, takes care of anyone getting into a fight.
Ben: Well, whatever the Pope was one once.
Me: Well, altighty then.
This kid makes me laugh!
Posted by Kelley at 10:17 AM No comments:
Labels: kids
Newer Posts Older Posts Home
Subscribe to: Posts (Atom)