I
My kids are excited! I finally pulled Christmas gifts from my closet and put them under the tree this afternoon.  Since we'll be with family for Christmas, I didn't want to travel with our gifts. We decided to have a nice dinner out, then do our gift opening.  There's several that I'm excited to see the kids open - hopefully, they will be excited about them as I have been.

Last night Drew wanted to play games. So, we did a family slide contest before we broke out the cards.  William won (posted his video on FB), but we all had fun....and while I fell on my 2nd slide no one got hurt!
Posted by Kelley at 2:36 PM No comments:
Labels: life 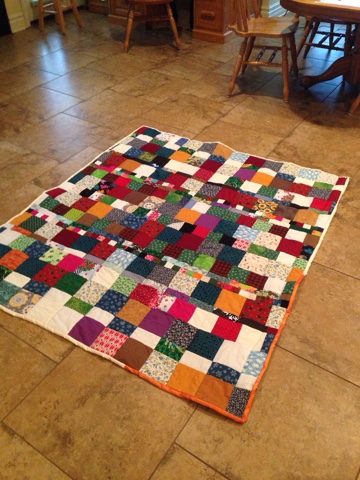 A little bit of this fabric....little of that...sew them into strips...and then sew the strips together.  While its not straight at places, I think it turned out nice still.  This one went to a friend who is adopting a foster child.  He'll move in over the Christmas holidays.
Posted by Kelley at 4:33 PM No comments:
Labels: quilting

One of the things I have been pondering this Christmas is how can singers sing some of our beautiful Christmas hymns about Christ, but yet not believe in Christ. Sort of has me befuddled... Also, what exactly are non-Christians celebrating when they celebrate Christmas??  Do they really just see it as a time to give and get gifts??  That just seems so shallow and pointless to me....Christ gives meaning to so much in my life and especially during this time of the year. I can't imagine Christmas without Christ.

This has come about by us watching an interview of James Taylor. In it he states that he was raised in a home that did not attend any church.  We have a Christmas music CD of his that we listen to when we are in Drew's car.  Some of the songs he sings are so heartfelt!  But yet in the interview he talks of being "spiritual", but that's not the same as being a Christian with a saving belief in Jesus.

He's not the only one. One just has to listen to the radio (or Pandora or iTunes or Spotify) to hear just about any famous (and many not-so famous) people recording Christmas songs.  And like James Taylor most seem very heartfelt.  But then you look at their lives or read more of them and you just wonder....how do you sing of the Birth of a Savior and not believe in the words you are singing???

Posted by Kelley at 1:15 PM No comments:
Labels: Jesus stuff

What Not To Wear

During this past summer my friend Cheryl and I were talking about clothes. I said I needed someone to play Stacy and Clinton from TLC's What Not To Wear and go through my closet.  Well, she said she would!  Last week we finally both had free time.

And she through out most of my clothes....probably about half...  But this being first world, I still have a lot of clothes - plenty! - to wear.  She pointed out which clothes are the wrong color for me - which I'm not good at all!  She, also, helped me get rid of some items that were too big....but I still wear. There were several shirts that I didn't wear a much  - mainly, because I really didn't like them.  What am I keeping them then??  TIME TO LET THEM GO!!!

While she would love for me to get rid of more pants, I had to keep them so I would have something to wear!  I think she only liked one pair of jeans and one pair of capris....no other pants!   I just have a hard time finding pants that really fit, so I just don't shop for pants much. The end result it that I wear pants that are too big and just wear a belt.

We did not have time to go through my skirts or shorts...maybe another day.  I do want her to go shopping with me when I start to replace these items...especially, pants!!! And I need to write down what colors she said looks best on me....like purples need to be more wine not grape....no grays....See. I can't even remember!!

But it was  fun afternoon!! We laughed so much!!  Another friend was with us, Tonya. Now, Tonya doesn't care one wit about clothes! She usually just wears tee shirts. After it was all over, Tonya said - "Cheryl is NEVER getting close to MY closet!" 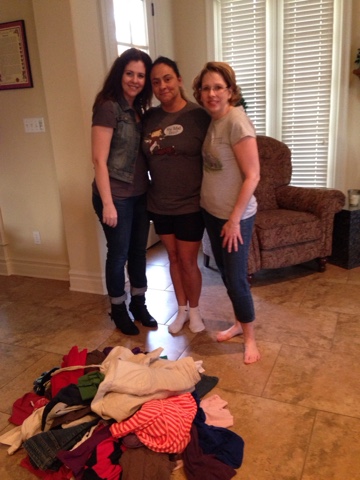 William - he had a great first quarter at college - three A's and one B.  The B was in English - no surprise there.  This quarter he's taking another calculous class, a physics, and two engineering classes (if I'm remembering right). He'll be home at some point this weekend for Christmas break .He's still having the time of his life! And not really missing us at all...well...maybe missing Melissa...and he plays on-line video games with Ben, so they talk often, but he's not missing mom or dad!

Melissa - is disappointed that the scores for the PSAT are not being released in early December as promised. It's now has a release date of early January.  She took the ACT again this past weekend. She currently has a 29 score, but wants a 33 to beat her older brother and to get eligible for a "full-ride" scholarship to Ole Miss.  She's doing okay in school this semester....a little worried about her grades in college math and in her college biology class....not sure if she'll be able to pull out an A in these....she's had a high B/low A all semester....  These two classes are much harder than she thought they would be.  But she's studying!! Giving it her all!!

Right now one of her favorite things is to volunteer at Teen Court. She in a program through the school where she had to visit several programs of the parish and one being Teen Court.  She loved it!!  She helps the defense lawyer.  She's now thinking about law school.  (Remember: she has a history of changing her mind every six months or so....but still.  A lawyer? She would rock it!) I think she gets a kick out of seeing which kids from her school had to show up for Teen Court as punishment not volunteer work!

Benjamin - high school soccer is keeping him busy. He's on the junior varsity team and gets to play about 15-20 minutes each game.  Not really as much as he wants to...he would love to play the whole game, of course!  If he stays on track these last few days of the semester, he'll have all A's this time around.  He's taking PE, geometry honors, English honors, and world geography.  He, also, took the ACT this past weekend. We'll know in the next few weeks to a month the scores.

The big news for both Melissa and Ben was our wonderful youth minister at our church is switching over to college and single ministry.  While Drew and I weren't too surprised (only some at the timing), this was out of the blue for them... Melissa was very upset.  As the days go by, I think she understands a little more, but just needs a little time to adjust to the changes.  I'm not sure how long it'll take to hire a new minister....he'll have big shoes to fill that's for sure!


Drew is still loving his job...traveling some now and then.  Last month he and I went to Dallas for the weekend for a marriage conference.  It was a good weekend.  Our church host a marriage retreat each summer, but we have never gone (for several reasons).  One of the things we enjoyed was that we knew NO ONE on this trip. We didn't have to worry about being social or anything other than just us.  It was very nice to get away for a few days.  (And of course, being in Dallas, I enjoyed going to Trader Joe's!!)

I'm still loving my job.  Keeps be buys enough, but not too busy. And still loving that I don't have to deal with other people's teenagers.