Tonight Benjamin finally got around to putting together a kit he received for Christmas: a da Vinci Catapult.

Drew & I laughed at part of the instructions. It said "...and a heathy snack." We both thought that mean this was going this little project was going to take a long time! While Ben did end up eating that heathy snack with his dad, it didn't take too long to put together.

Of course, I really didn't like hearing "Mom, you might want to watch out!". Thankfully, he decided to shoot for bunnies instead Mom. 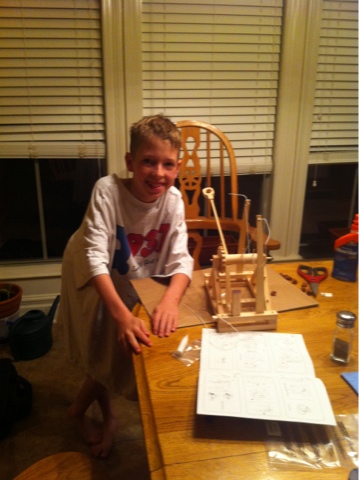 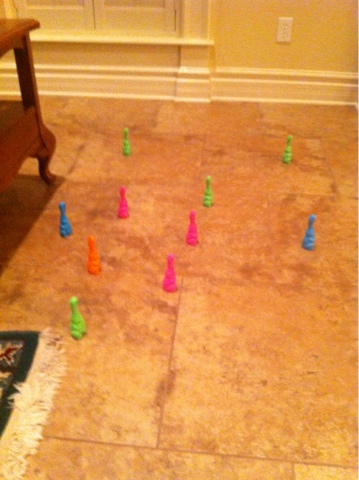 Posted by Kelley at 8:54 PM No comments:

A popular quote when I was in college was "I do not agree with what you have to say, but I'll defend to the death your right to say it." by Voltaire. In fact, it was at the top of the front page of the college newspaper often (if not every day). Back then I seem to remember it being more in thought of race relations and, as well, if the Rebel flag should be flown (I did go to university in the Deep South, after all).  But I also, remember it being talked about in reference to the burning of the US flag.

These days, disagreeing is no longer an option. Why, I ask?? Last week actor Kirk Cameron was on Piers Morgan's show promoting his new movie, Monumental. During the interview, Mr. Morgan asked Mr. Cameron if he was against gay marriage (which has nothing to do with the movie they were suppose to be talking about.) Mr. Cameron gave a very calm, soft spoken response in which he stated his belief against the homosexual lifestyle based on his faith in the Bible.

Kirk Cameron, of course, was BLASTED by many in the media for his "hate speech". I've seen his response. Nowhere did he tell people to go and hurt gays. So, why was it called "hate speech"?  Why can't he have a different point of view?  Isn't that allowed under our Constitution? By him having a difference of opinion, that does not stop people from living the way they want to. Why do they care what he says, anyway???

But it's not just this issue that the media and Hollywood lambaste outspoken Christians and Conservatives over. Where it's abortion, illegal immigrants, the tax code, health care or voter identification cards, it seems to me that people no longer what to discuss issues - they just want to call others names. No longer is it okay to have many views on an issue. And I'm talking about both sides of the aisle in Congress!

The message we are sending to the next generation is "We must all think alike".  WHY?? I ask!  What are we producing? Robots to run the country in the upcoming years? This country has always been a light to the world to show that "a mixing bowl" can live in harmony.  Sadly, I think those days are over.

But you can disagree with me. I'm okay with that. I'm strong enough in my own views that I don't need your approval or for you to agree with me.
Posted by Kelley at 10:27 AM 1 comment:
Labels: Jesus stuff, life, odd events, Ole Miss

Monday I subbed in one of those lovely eight grade classes.  I actually was just worried about the last two classes of the day....they really gave me issues last time I was in that class. But the teacher must have put the fear of God into them because they were good as gold. They stayed quiet and went right to work - or rather at least acted like they were working...based on how many actually turned work in, I would say many were day-dreaming or faking the whole working thing.

But - it's their grade not mine.

Then there was third hour.  It's a computer class and according to the teacher they had lots of work to turn in. But most said they were done. At about five minutes left in class, I said for those that were actually working they could start to save their work and pack up to leave. Every one did and then proceeded to stand at the door...then the in the hall way...then down the hallway...then by the door to the portable building that we were in. All the while ignoring me when I was asking telling them to come back to the room and to be quiet as there was another class in the building.

So, there I was...standing at my door trying to keep an eye on the few that were still in the room and the rest of them as they proceeded out the door - as one boy grabbed another boy's hand and used it to pull the fire alarm.

Thankfully, this fire alarm was not connected to the whole school or the fire department so we didn't get a trucks in our front drive. (Of course, that could be a BAD thing if it was a REAL FIRE!)

But still. Pulled the fire alarm. On my watch. I wasn't called to work yesterday or day....wonder if there's a connection......
Posted by Kelley at 7:47 AM No comments:
Labels: working

This morning Drew flew back into town after being at some training most of the week.  We met him for lunch at one of his favorite Italian places. I thought you would find our conversation entertaining.....

Me: So...you want the good news, the bad news, or the other bad news?

Drew: haha...just tell me  (Which is his normal response to my good news/bad news intros.)

Me: Well, the kids and I wanted to surprise  you when you got home by doing the yard so you won't have to. First off, William was going to cut the grass, but after getting the lawn mower out, I remembered you lowered it last time and we couldn't get it back in to the higher position.

Drew: Good - I didn't want the grass cut again until after the seeds I sowed had sprouted some.

Me: Ben got all those sticks in the back cleaned out so that worked out well, but while William was using the weed-whacker, it quit working. We couldn't fix it, so you'll have to. SURPRISE!

Today I finished what has got to be the longest book I have ever read - 542 pages. That was the amount of reading - then there were pages and pages of index, notes, bibliography and even reader questions.

Bonhoeffer: Pastor, Martyr, Prophet, Spy  A Righteous Gentile vs. The Third Reich was written by Eric Metaxas.  I heard him on a radio show talking about this book and this man: Bonhoeffer. I had never heard of Dietrich Bonehoeffer before, but I was intrigued by what was said.  How he not only tried to stand up to the Nazi's, but also was in on one of the conspiracies to kill Hitler.

A pastor? Trying to kill Hitler? I wanted to learn more. And was delighted that my library had the book. (I do sooo love my library!!)

It took most of this last week, but read it all the way through I did.  Mr. Metaxas is an excellent author - humorous at times even within such a heavy story of WWII and the killings of way too many people.

It's encouraging to know that even in such dreadful times, God not only calls out men to be courageous to stand for Him and for those that can't speak for themselves, but that people obey that calling.

May we all who say we believe actually prove it with our actions as Dietrich Bonehoeffer did.
Posted by Kelley at 3:51 PM No comments:
Labels: books, Jesus stuff

I'm still amazed at how many days can go by before I find time to sit and write a post! This week has been full - not crazy busy, but good and full. I did work Monday - sadly with those dreadful eight-graders, but thankfully they were not too bad. I also worked today, but in the front office...which has it's own craziness...but with adults...but fun. I really do enjoy working in the office. The ladies there are a hoot!

I did a HUGE commissary trip - the kids were SOOO excited!! I came home with like eight bags of chips - but they quickly realized they were not all for them. We are hosting a church youth event here at the house and I wanted to make sure I had enough food for a dozen teenage girls.  The great part was I had some great coupons for those chips - I do love coupons!

So - yes, lots and lots of teenage girls at the house this weekend.  William will be with the boys at a different house and Drew and Benjamin are running away to Dallas to escape all the girls.

A Love that Multiplies by Jim Bob and Michelle Duggar - very enjoyable! It was nice to see the details behind the scenes from the family's show and their belifs. I borrowed this from a friend as the library did not have a copy. I would like to try to find their first book.

Secret Daughter by Shilpi Somaya Gowda - love it! This is a story about an adoptive daughter and the two mothers in her life. A beautiful picture of how adoption can bring  people together and gives hope where there is very little.

Things with Remembering by Jackina Stark - a good read! Ms. Starks weaves a story of how misconceptions can damage a family and lessons in honesty.

A Stolen Life by Jaycee Dugard - wow....what a hard read... This is the true story of Jaycee Dugard who was kidnapped at age eleven and was not found until age 28....18 years in captivity. This was hard to read...very sad to know a little girl had to suffer...even harder that there were people who could have stopped it or ended it early and either chose not to or lack of work ethic and neglect led to her being abused for so very long.

James: Mercy Triumphs by Beth Moore - this is my ladies group current Bible study book. So far, I'm enjoying it, but then again - James is an amazing book of the Bible so, of course, it has some wonderful stuff in it!
I also picked up two other books at the library that I did not finish: A Christmas Wedding by James Patterson and Richard DiLallo - within a few pages there was cussing, drug abuse, and spousal abuse. I decided that I didn't want to fill my head with these characters especially during the Lent season.  Just was not in the mood.  The other book was Beach Trip by Cathy Holton. It tells the story of four college friends meeting up after twenty years and spending a week together at a beach house.  Once again, I think I was just not in the mood for this secular book...it just didn't catch my attention after a few pages. I'm to the point that I want to read books that inspire me...not depress me.  It seemed that several characters did not live the life they wanted and were depressed.  There's enough depression in life - just watch the news! - that I'm not in the mood for it right now....maybe another time...or not....
Posted by Kelley at 9:51 AM No comments:
Labels: books, Jesus stuff

So glad Aunt Trish loves William enough to send him the best strawberry cupcakes for his birthday. 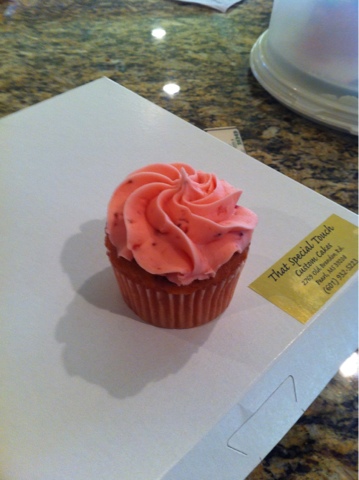