From Nasty to Gutted to (Hopefully) Nice

Last Sunday we had several errands, but ended up with about 30 minutes before we dropped William off at play rehearsal. We decided to stop by Wendy's since William needed to eat beforehand.

I was not impressed. Disgusted, yes. It had been years since I had eaten at a Wendy's - and this one was the perfect reason why. Even though it was about half full with people, it seemed as if no one had cleaned any of the tables.

My family knew I was not happy when I pulled out my Germ-X. I'm not a big germ-a-phob so for me to start pouring the gel out, the kids knew I was grossed out.

At one point Melissa rolled her eyes and said, "She does this at Waffle House,too."

Only at the nasty old ones!! The ones where you can see the inch of grease everywhere...yuck!

But today as we past by Wendy's I has only one thing to say: I told you it was nasty!!!

It was totally gutted!! You could see through it. It seems that it is following the way of our McDonald's & Burger King in getting a total make over.

It so needed it. 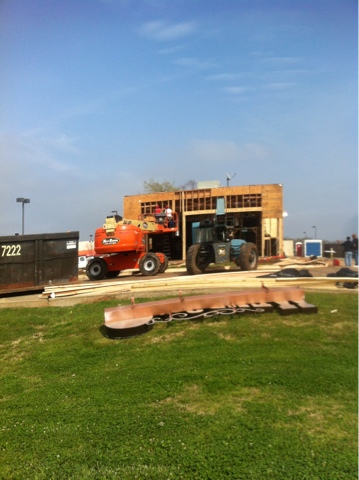 Posted by Kelley at 3:54 PM No comments:
Labels: odd events

Before & after the chop. 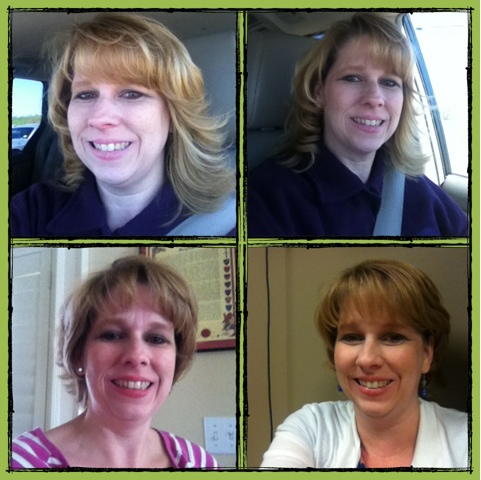 Yesterday was a day of getting a few "spring cleaning" items taken care of. One of them was Drew replacing all the air filters and vacuuming and cleaning the vents. While doing that, he realized that the upstairs unit was not working well. It seems that it was set on 65 and not really running....not good at all....

It's not a good thing. I left the room and stayed far, far away.

I never like it when Drew is upset...and now WAS2 doesn't either.

Not knowing what he (William) was doing, he tried to reset it because he was hot upstairs...but did not set it well at all! No telling how long it tried to run on 65 and probably just froze up.

We're letting it "rest" and unfreeze - hopefully, it'll work fine when we try to turn the AC back on....
Posted by Kelley at 11:14 AM No comments:

Friday night I had two dates for the evening: my husband and my oldest child. William is in his school's JRROTC program. Friday night was the annual "dinning out" - dinner, a small program, and then a dance afterwards. Basically, it's like prom with a meal served.

This year was held jointly with another school. On one hand, I think that was a brilliant idea! There was more people there and so, more excitement in the room. My only complaint was the other school was literally double our size. I think some of our kids felt a little lost.

The female cadets were allowed to wear long, formal, prom-like dresses instead of their uniforms - which I was surprised at. But I know all the girls loved getting a pretty dressed and dressing up!  All three of us agreed, that while it was nice seeing all the pretty dresses, seeing a girl stick her elbows out like a chicken then pulling up a strap-less dress is very unattractive! As well as seeing one girl pull a cell phone out of her bosom. At one point one girl passed by us as she was going to the stage to receive an award, and William said, "That's the best dressed here tonight." Thinking I missed some award, I asked him why. His answer? "Because it's green."

I was a little shocked at seeing at least two girls supporting tattoos on their shoulders. Teenagers.  In high school. With tattoos. Really??  William didn't know who they were, so we assumed they went to the other school. (The other school does serve a rougher part of the parish.)

One very odd thing about the evening was the family that sat at our table.   I had met the mother several times at the middle school and knew the father was in the middle school as well as they were very conservative. I'm not sure how it came up Friday night, but the comment was made their girls were not allowed to have their ears pierced until they were 16. Which is all fine and dandy. If that works for you, go for it. That's not the odd thing of the evening. It was the boyfriend.

Or rather who we assumed what the boyfriend. Or at least the date. Or the boy that was a friend. Or something...

Early in the evening a teenage boy sat at the last empty seat. The father said, "Oh, hello, Zach." Other than asking if he wanted any ice tea to drink, that was the only comment made to the  boy.  But the girl and him made eyes and smiles at each other all night. I know this boy from subbing and William knows him from school - he's a good kid. (I doubt he has any tattoos!) But it was just odd sitting there and the parents flat out ignoring him. Their daughter and him were literally sitting directly across the table from one another. I almost offered my seat to her so she could sit next to him, but didn't want to embarrass her in case I was reading the situation wrong and they weren't dating.

Since no one really talked to Zach, I just couldn't tell if this was to be a date or not.....it was just odd and strange.

After the dinner and program the mother asked me if I would take their picture on the stage where many flags were standing. Afterwards, I turned to walk off the stage back to William and Drew, and there was Zach...waiting for the family....so...I guess he was there as a date...??/

There's a movement within Conservative Christians to not allow dating for any teen. A part of me  gets it. None of us wants our children to get in situations they are not mature enough to handle. But yet, if by the time they leave high school and still have never been on a date, they will be leaving for college not totally prepared for the social side of life.  There's got to be a happy-medium.

Maybe this family was trying to find that happy place....a date, but with parents close by.... But I'm sure the girl and the boy didn't need mom, dad, and sister to be sitting in between them!

As we were leaving I told William this would  be the perfect place to take a date: dinner, a program, a dance - all at the same location (the local Air Force Base). Time will tell if he'll come out of his shell and find a date next year.
Posted by Kelley at 6:20 PM 1 comment:
Labels: Jesus stuff, kids, life, odd events

After four days in the front office & one day as an aide, today I'm a real teacher! With full pay. That's nice.

It's test day, so that should keep them busy. In fact several in first hour didn't finish at all. A few said they would come during PE. We'll see. It's their grade.

The only thing bad about this teacher is his off hour is now (2nd hour) & he has early lunch. That means his afternoons go from 11 to 2:30 without a break - makes for a long afternoon.

Today is 'club' day so that helps! On club days it an abbreviated schedule in order to use the last 30 mins of school for the different clubs. I'm sure I'll have a few students who have no where to go & will just hang out in the room.

Drew has a new name: iDoctor.

I was so proud of myself for going two and half years with my iphone and it not cracking or being dropped in water. But that streak ended last month. Not sure how it happened, but the front screen cracked.

I think it happened the night of Melissa's beauty pageant. I had my iphone, keys, camera and no pockets. I must have hit it all together the wrong way. I didn't notice it until the next morning at church. Boo-hoo!

Even though I am eligible for an upgrade, we want to wait a few more months before buying a new phone. I remembered a friend mentioning on facebook that her husband replaced his broken front screen by buying a kit off of ebay and watching a youtube video.

So, we looked around ebay and youtube. Drew saw a challenge! And he conquered it!

He did run into a few problems (like a stripped screw) and it took most of the afternoon as he was going very slowly, but it worked! I now have a crack-free iphone once again!

And I will be very careful not to break this one!
Posted by Kelley at 8:41 PM No comments:
Labels: life, odd events

Many years ago I started to drink less carbonated drinks - a lot less! When Drew meet me in college, I pretty much drank only Cokes. But between pregnancies and learning more about nutrition, I just don't drink many any more. I drink one a week or one every ten days or so now. It's a treat - not a staple.

Even when we have parties I have don't serve sodas anymore. I serve lemonade, sweet tea, & water. But an interesting thing has happen at our parties: several times I have been told that the lemonade is the best they have ever had.

My secret? Kool-aide lemonade. It's got to be the simplest thing ever!
Posted by Kelley at 12:35 PM 1 comment:
Labels: life

In the last few months two of my friends have moved overseas following their military husbands. One is in Tokyo, and the other is outside of London.

It's been fun to read about their adventures. But I will admit it also makes me miss living overseas...so many interesting places.

I love living here - but interesting? Not do much. Beautiful? Nope. Not here in this part of the Deep South.

But I love being close to family...but going I get go at least travel soon!
Posted by Kelley at 9:26 PM No comments:
Labels: life

I usually don't work on Wednesdays because I host a Bible study at my house for a few of my friends. Today though, I cancelled study since most everyone had a conflict. The new plan was to go to the base for a few errands with Drew including going to the commissary.

At 6:30 I got a phone call from the school secretary asking me to work for her. Her father-in-law was in the hospital not excepting to live through the day. Drew said he could handle the commissary, so I said yes. I really do like working in the school office. I had been scheduled to work for a teacher aide tomorrow (Thursday) & Friday, but now I'll be in the front office. Which is more than fine with me!

I, also, like getting more days in working! For most months I gave only gotten two it three days at the most. A few weeksk ago I said something to the school secretary about wanting more days. So, I've been getting them! Yea!! For January I got two days. February? Seven! And so for in March I have already worked three days and have five more days scheduled.
Posted by Kelley at 9:06 PM No comments:
Labels: working
Newer Posts Older Posts Home
Subscribe to: Posts (Atom)