As I was explaining to Ben & Drew the four types of personality a speaker spoke about, I said that one type was called a Mary Jane.
Ben got a confused look on his face and said, "That's not good...after a dead person?"
What do you mean??
"Wait...what do you call a dead female that you don't know her name?"
That's a Jane Doe.
"Oh. Okay. Mary Jane's okay then."
Yea....
Posted by Kelley at 8:36 PM No comments:
Labels: kids

So far in 2016 I have read six books.  As I said this year I want to re-read some children classics. I have read the first two in the Narnia Chronicles.  And enjoyed both.  I had forgotten some of the details over the years.

I have also read a series of three by Lynette Eason called Deadly Reunions. 1: When the Smoke Clears 2: When A Heart Stops 3: When a Secret Kills.  I enjoyed how the author wove the on going story through-out the series.  All were on the light side...an easy read, if you will.  While they are under "Christian Lit", I will say they are not overly Christian.  Lots of references to praying, or "God", but not evangelical at all.  And no sex scene at all! Which is very nice  I know what goes on in the bedroom - I don't need a play-by-play!

The book I finished this weekend is called Gilead by Marilynne Robinson. I only read this book because a friend asked me to - several times! She first gave me the book back in the summer. I tried to read it, but just couldn't get into it.  When I tried to give it back, she said - "no! I really want you to read it so we can talk about it!!'

So, I forced myself to read it.  It's heavy on descriptive narratives to tell the story (what little story there it - it's mostly these non connecting stories)....very little dialogue. The story is told by an older man who is at the end of his life and wants to make sure his young son knows certain things about him and the town they live it.  The old man - a preacher - tells stories about his own family, the town they live in and the son of the preacher's best friend.  It seemed to be it wasn't until the end of the book that you learn the story behind this son of the friend.

It just had too many descriptive narratives for my taste....yes, there were some beautiful sayings, but I won't be reading the companion book that tells the full story from this friend's son. I'll be skipping that one...and just go back to my children's classic or my light fiction....or maybe even a memoir....haven't read one of those yet this year....or one of the Christian theology/living books that's on my nightstand...

Posted by Kelley at 3:57 PM No comments:
Labels: books

Drew and I got a craving for grilled oysters.  It's one of the dishes we love getting when we're are in New Orleans. Drew called around here in town and found a place to buy them fresh by the bag.
Next item was to find friends to help us eat them. Our good friends, Tim and Tricia were on board...until soccer wrecked my schedule and we had to change nights...to a night Tricia had to work.
So, we asked several other friends, but they turned their noses up at oysters. But two couples - one from Drew's work & one from church - decided they were up for some. The couple from work use to live down on the coast and not only liked oysters, but the husband was an expert at shucking them - yea!! And in the end we needed that help!! Takes awhile to shuck a bag!
The other couple had never had oysters before, but were brave in helping  shuck and at eating them. They are now believers!
And the King cake? Oh, so, yummy!! This one was strawberry and it had slices of fresh strawberries in the jelly filling. I'm hoping there's more of them for me in the festival season.
But the best part of the evening?? A visit from William. It was so nice to see him. Of course, he was really just in the house because of the oysters. But still. A nice visit! 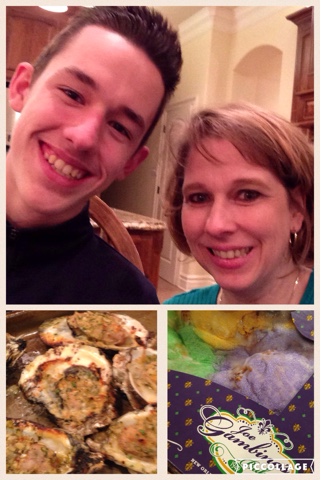 Posted by Kelley at 1:13 PM No comments:
Labels: kids, life

Benjamin has a bad habit of losing things....books, his wallet, his kindle, lunch box... Most of the time he doesn't realize he's lost the item for days.
The other day I told him he had an eye doctor appointment latter in the month. He said, "That's good 'cause I don't know where my glasses are."
Great.... So, I rescheduled the appointment for today. Hopefully, the new glasses won't take the full two weeks to come in.
Of course, that's not all he's lost in the last few days. We're currently looking for the house key he misplaced as well... Lovely.
Posted by Kelley at 8:11 PM No comments:
Labels: kids 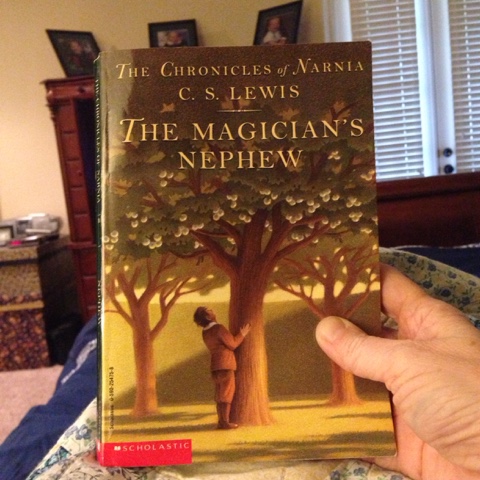 Book one of Narnia done...on to the book two
Posted by Kelley at 8:03 PM No comments:
Labels: books

William loves eating poptarts for breakfast...which his sister knows....and decided to hook him up for the rest of the quarter semester. As you can tell from his big smile, he loved his gift! Isn't great when you get the perfect gift??? 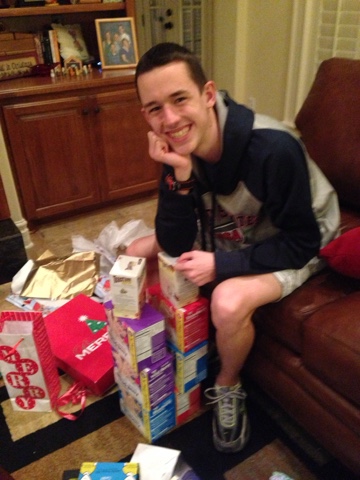 The funny thing is I was going through some old papers and found an old picture of William....eating a poptart! Guess some things you never out grow. 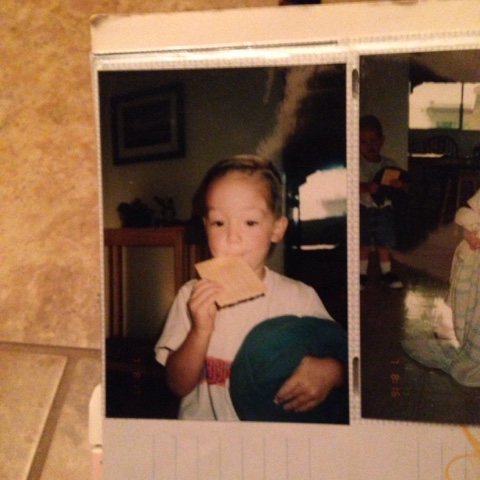 This is Matt & Mo, our nighbors. They moved in the past summer and we have so enjoyed getting to know them!  Matt works for Allstate who was the sponsor for the Sugar Bowl. It was great fun seeing them at the parade as well as getting to share dinner with them before the game. Mo, Tennessee girl at heart, is learning to love some good Louisiana food - she ordered cheese & grits - and loved it!! We'll make her a Louisiana girl yet!
Posted by Kelley at 4:20 PM No comments:
Labels: Holiday season stories 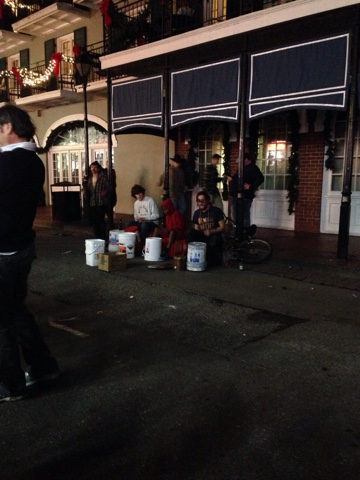 This is a picture of one of many steet entertainers we saw on Bourbon Street & French Quarters during our New Orleans trip for the Sugar Bowl.
Yes, I took my teens to Bourbon Street. After dark. On New Year's Eve.
I know some would criticize that decision. Obviously, I disagree. My kids have been on Bourbon street before - probably never after dark though. But Drew and I both wanted to go. And besides: if I'm with them the first time, I can comment and help them process all they saw. Now the mystery is gone....I don't think it'll now hold the allure that some have of this grand place. Besides, we were back in our hotel room by 8:30 - well before things got too crazy.
So. We saw lots of musicians...really wish it had been warm enough for us to find a place to sit to enjoy the music. Also, we saw people dressed in all sorts of ways...from wearing their team's colors to formal dress (as it was New Year's Eve!).  We, also, saw others dressed ...well....interesting is the only word that comes to mind. To be honest there was one person I couldn't tell the gender... Drew said I should have looked closer....but it was a..hmmm...'plump' person in a bikini and I really didn't need THAT cluttering up my mind.
There was a person in a Minion costume, Star Wars' Storm-trooper, and Chi-baca.
But on the way back to our hotel things got interesting... Melissa and I popped into a McDonald's to use the bathroom. Drew and William stayed outside to wait for us....and got to see a drug bust.
Drew thought it was over meth.
Well now. That's something we don't see everyday!
Then. The next night. We were walking to the Super-Dome for the Sugar Bowl... William was leading us and got hugged by a drunk (or high) guy asking if William had a 'cig' and wanted to know what drugs he had.
William asked, 'I got nothing, man'. (Which is the ONLY correct answer when your family is with you!)
There was a police officer following this guy and quickly told him to 'leave these good people alone and move on'.  It all happened so fast! Too fast for any of us to really say or do anything. The guy moved on....and so did we!
The irony is Drew has his gun with him most of the time he travels. Not this night. But in the end we got to the Dome safe and sound.
Yep, my kids got the full New Orleans  experience.
Posted by Kelley at 8:47 PM No comments:
Labels: Holiday season stories

My reading goal for 2015 was to read twice as much non-fiction as fiction. And I did!  I read a total of 76 books, 53 non-fiction and 23 fiction. (Yes, I read fast. Yes, I love to read. Yes, you make time for what you really want to do! And I really enjoy reading!)

Here are some of the best:

Non-fiction:
The Bible...of course, I think it's the best book! And I really did read it through twice in 2015.  The first time was with my everyday translation, The Holman - pretty much beginning to end, but did skip around a little. The second time I read it through I use the Message and I read chronologically.

The Wright Brothers by David McCullough
Outliers - by Malcolm Gladwell
Women of the Word by JennWilkin
Seeking Allah, Finding Jesus by Nebeel Qureshi
Being Mortal by Atul Gawande
The Billion Dollar Spy by David E Hoffman
How Dante Can Save Your Life by Rod Dreher
7 Men and Their Secret of Greatness by Eric Mataxas

Fiction:
Two really stood out to me this year:
The Martian by Andy Wier - and I enjoyed the movie...I mainly read it because of the movie version. I'm very glad I did!! I will give a warning though: the language is salty!!! Like a sailor!! But not in a vulgar way...sadly, the main character spoke like many people do today. But the amount of science in this fiction book? Amazing!  My whole family enjoyed the movie as well....might even try to see it again.
The Nightingale by Kristen Hannah  - she is probably the top fiction author for me.  I think I have read everything she has published and have enjoyed each one. This one to me is her best work.  This would make a GREAT movie as well!

For 2016:
In looking ahead to this New Year one of my reading goals is to re-read some children classics. I'm looking forward to diving back into The Narnia Chronicles as well as The Borrowers. I, also, have my eye on some of Madeleine L'Engle books.  Some of these I read as a child and others I read with or to my children. I think it'll be refreshing to re-read these classics. I'm, also, looking into reading a few books that will be released as movies this year. (And yes, I know.  The book is always better!)

Stories From Our Holiday Season

Melissa has a personnal space issue. As in she doesn't really like it when people invade it.
And by people, I mean her family.
The boys in the family like to help her get over this issue. Or maybe they just like to irritate her...Elevators are great place for some therapy. 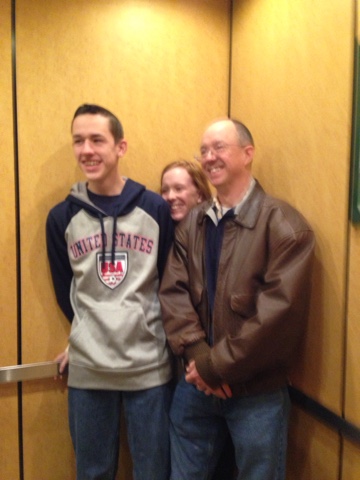