The Powder of "No"

Last night William and many of the rest of the seniors spoke at youth group last night...not really their testimonies, but more of a 'parting thoughts' as it was their last night in youth group. When I asked him if I could crash in on the youth meeting so I could listen to him, he said no. I really wasn't surprised.

After all, he's eighteen and looking for ways to separate from his family and be more independent. And this is how we've raised them!  Being independent and self-sufficient is a goal I have for my kids. (And by that I mean that they know how to do things by themselves, take care of themselves - not in a spiritual way, but physical, emotionally, etc.)

I texted and ask a few of my friends that help with the youth group to video-tape William.  A few were like - "come on over anyway!!"  But no.  I wouldn't - couldn't without doing damage to how I have parent.  But it made me think of why we do this.  It's been so long since  I have thought about it.

I think it started with two things. One was all the investigations of sexual assaults that Drew has done over the years.  In many of them, it was the woman claiming she said "no", but the man claiming he didn't hear it. He's excuse many times was "but she was acting like she was enjoying it!!" (I've always that meant that the man thought he was such a good lover that no one could really turn him down - and he was so good he could change their mines....totally not realizing that he was really raping them.)

How many times have we seen in movies a women  saying 'no' and 'stop it" while she was laughing, giggling, smiling?  I don't think women mean to give mix signals, but many times we do. Maybe it's because we aren't taught to stand up for ourselves or taught to be assertive.

Around this time that Drew and I were having these discussions about his cases and the cases in the news, I read a book where a mother describe a scene she witness with her teenage boy and his fellow youth-group-friends.  She was hosting a swim party for the group and at one point saw one boy trying to dunk a girl.  While the girl was laughing as she was trying to get away from the boy, she was yelling 'no' and 'stop it'....but the boy did not.  This mother stepped over and told the boy to stop - which he did.  She then asked him if he heard the girl say "stop" and he admitted that he did.  The mother said, "Then respect that!"  The girl acted like she didn't want to make a scene and said, "Oh, it's okay - I know he was just playing around."  The mother told her that no, it wasn't okay.  'No means no.'

This is what I have tried to teach my children - especially my boys.  When someone says 'no' or 'stop it", you respect that. No means no. Whether it's William and Benjamin wrestling around like boys do or whether it's with coming into Melissa's room. I've said it many times where they were toddlers and preschoolers whining to get their way by asking over and over again - I said no. And I mean it!

When I subbed I would have a student ask for something...to change seats or whatever and I would say no. They would NOT take that as the final answer. They would ask over and over again. I would just looked at them, "I said no. Whining and asking over and over again may work at home, but not with me. That's my answer and it's not gonna change. The option is for you to accept or get a referral for being disrespectful."  They would then usually accept it....but I, always, found it sad that they didn't know that no mean no....they had no idea how to accept that as an answer because they were so use to getting their way. Life doesn't work that way....no means no.... Even when I don't like it.
Posted by Kelley at 2:30 PM No comments:
Labels: kids, life, odd events

One of things that I love to do with my family is having family dinners. Especially, when it's full of laughter. But Drew and I, also, are still trying to get the kids to eat vegetables. Which they are STILL trying to avoid.

The other day when my parents were here we had a nice dinner. But the kids were resisting the butter beans....and the salad...  They each ate about  two beans....and swallowed them like you would medicine.

At one point Benjamin pointed out that he had salad, but I said, "Yea, but you didn't eat all of it - there's still lettuce on your plate."

He then processed to pick up his lettuce and put it on his napkin.  "Not on my plate anymore."

Oh, Benjamin.  You do make me laugh...especially when I should be yelling at you for your sassiness.

But Ben wasn't laughing when his father put more salad on his plate.  The rest of us did - which just about push Ben into tears.  He was very thankful when Drew told him he didn't have to eat the extra lettuce - that he was just messing with him.

That kid....makes me wonder what he'll say next!

Here's a picture of our new guest room: 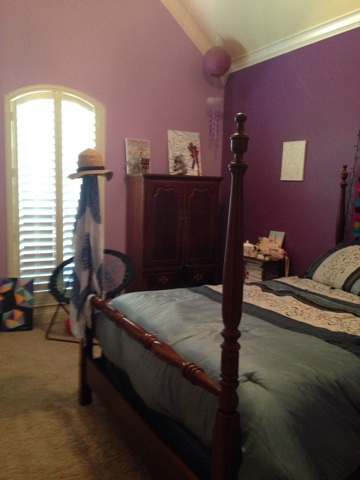 Or I could say, here's a picture of Melissa's room with her new bed (formally in the guest room). She's very happy with!! We had just bought this  bedspread and didn't want to get rid of it. Melissa likes it, so we'll kept it.
And here's a picture of our old guest room and now our sewing/exercise room. 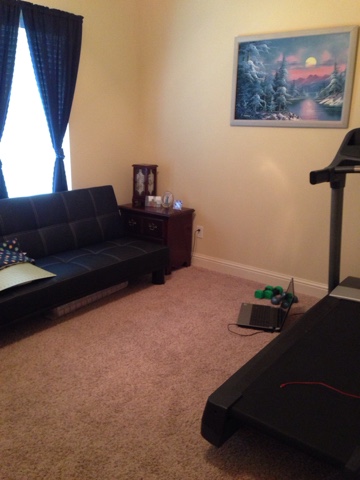 We got such a deal on the treadmill! So much so, Drew and I have joked about sending the former buyer more money!!  It's $1200 bread new, but we got it for $200 - what a deal!!!!  It's only about 18 months old. The former owner is moving from here to Little Rock and from a three bedroom house to a two bedroom apartment. She needed to downsize.
I  am so happy with my new room!! I love it!! Lots more room to work on my quilts. The futon is very comfortable- which is good since its Melissa bed when we do have guest.
Which we still want!! All guest are welcome!!
Posted by Kelley at 4:45 PM No comments:
Labels: our new life

More like 82 pokes by the time you add in the 'total positive' poke and then blood work. All in the name of allergy testing.
My allergies have been so bad this spring, that my normal medication isn't working. The allergist has given me a few new ones to see if they will help. Hope so!! Time will tell. 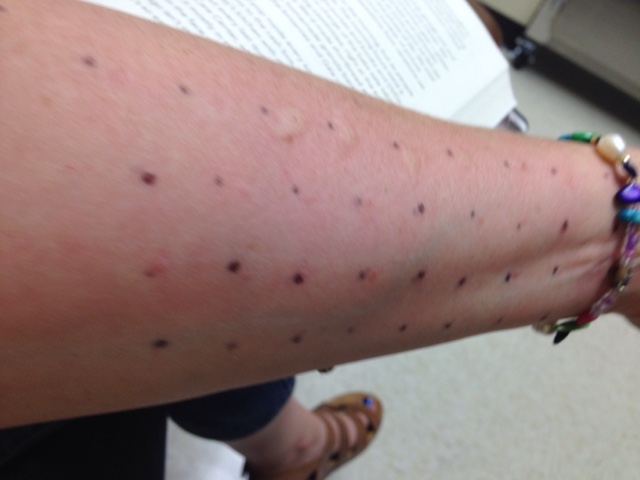 Last week we enjoyed Cancun with lots of Drew's family.  I really enjoy the beach...especially when there's a few umbrellas to sit under.  Time at the beach really makes me miss Guam....but I'm glad to be home. I love my bed....it's so nice!

Since we've been home we  -more me!- have been cleaning a few areas out.  We're switching around a few beds to make room for a  treadmill. We got rid of Melissa's double bed and have given her the queen size bed that was in the guest/sewing room. In order to make room for a bigger bed in her room, she had to clean out a few things.  Which - THANKFULLY!! - she did. That was Monday. Yesterday, she worked on cleaning out her amour. Today will be her nightstand.

(I'm constantly amazed at how much junk one teenage girl can collect!!)

I went through our linen closet. There were a few things we have had since college....time for them to GO!! And that ugly, ugly comforter Drew used in DC?? GONE!

I would like to go through my teaching items next....but I'm waiting for a friend to return from a trip. She is in college studying to be a teacher and I think she might want some of the books....we'll see.

I was, also, able to go through most of the closet in the guest/sewing room. I have one box left...maybe later today.

I wish I had taken a picture of the back of the van as the boys took the cast-offs things to the Goodwill! The back seats were folded flat into the small trunk and the middle seats were folded as well - and the van was full!!  The double bed plus all those old linens, comforters, and clothes from all of us.

The hardest thing to get rid of was the double bed....  It was actually our crib for all the kids.  I worked summer school in Albuquerque those last few weeks we were there to pay for it. Drew really didn't want me to buy it...  We had already had one miscarriage and he was concerned that we would continue to have pregnancy issues and he didn't want a crib hanging around reminding us of our troubles.  But I fell in love with it.

I actually saw it as a double bed - a sleigh bed - before I realized it was a crib as well.  Right away I knew that was the crib for me. I worked that summer school and then paid $700 for the crib and the extra pieces to make into a double bed.  Drew told me to keep it in the box in the garage.  It moved to Japan in the box....thankfully, in Japan we were able to get it out of the box, set up the crib for baby William.

But it was time for it to go...with all our moves it had been damaged and outright broken in several places.  It was not as stable as it use to be.

But still...  It was hard to let it go....I'm determined to make this house very clutter-free and to have the house set up with things we like and use.  I don't even want the attic full of things I no longer use, so off the bed went.

The boys took the van to Goodwill on Monday and I already for another pile of things that need to go as well.....Maybe the pile will grow today!