Today was camo day at school.

I'm so not into camo.

One of the clubs was sponsoring an after-school dance with the theme of Duck Dynasty and camo.  One girl was all deck out! Headband, shirts, boots, - even lunchbox.  Another girl even had a camo backpack.  Yep. This is the Deep South.

When William was a baby someone gave us a camo shirt. I refused to put it on the child. Just not our thing at. all. AT. ALL.

Of course, I had to laugh when my DAUGHTER was the  one in camo first out of all my children. The first year we were here the one of the school clubs sold a shirt the kids could wear at school (we have school uniforms.) It was camo. I was shocked when she wanted one. And wore it. Still does at times.

But me? I don't think I have ever worn anything camo in my life!

So not me.
Posted by Kelley at 4:25 PM No comments:
Labels: odd events

Ready or Not, High School is A-Coming!!

Tonight I went a high school orientation for Melissa. The counselor mainly went over the class options for 9th graders. Since I already went through this for William, she really didn't say much I had not heard before. But it was nice to make sure I had all the correct information.

Several of my friends who also will a freshman next year were there. Most of them said they were NOT ready for their child to be in high school yet. I on the other hand am very excited!

I love seeing how my kids have grown! Melissa is ready for this next step in her life. I think she'll have a great time.

While William is enrolled in a special called STEM, we have decided not to enroll Melissa. STEM is science, technology, engineering, and math. While
Melissa loves math, she doesn't really enjoy science. She wants to work with children in some way, so she won't be needing the extra classes. But she will enroll in honor classes as William did.
Posted by Kelley at 8:13 PM No comments:
Labels: kids

A friend of mine is in school to learn how to do facials.  Ultimately, she wants to be able to do all kinds of facials at a doctor's office - not just a salon. While she is in school she needs practice. Guinea pigs, really.

Yesterday Melissa and I were two of her Guinea pigs. It was fun - I enjoyed it. But I knew what to expect. Melissa? Miss Touch Me Not? Not so much.

My friend said that every time she run Melissa's shoulders, neck, or upper chest she would giggle. About the time she relaxed, it was over.

Afterwards, Melissa said, "I don't think I could ever get a massage!!"

While last week was slow and easy, this week has been busy. I have worked every day - which is very unusual for me. Monday, Tuesday, and Wednesday afternoon I was in the same classroom - sixth and seventh grade math. (I think they were so tired of me!) Today I was in eight grade lit. Tomorrow I'll be in the front office.

Thankfully, Drew has been home this week and has kept the house going. He did laundry on Monday and today took the kids to the orthodontist. So, nice to have him around to do that!

We have a few things going on this weekend...soccer....BX and commissary (since I've been working, I didn't get to the base)....a few other errands.  Hopefully, we'll have nice weather - it's been very rainy today!

Ben as very disappointed that it rained today - for the third week in a row his Thursday night soccer game was cancelled. But he did get to go swimming at the coach's house Tuesday night.  Drew and I both thought their pool was perfect....and would look great in OUR backyard! (Hey - we can dream!)

Melissa came home with the packet for her high school classes this week.  In just a few months, we'll have another high schooler! She's very excited!!
Posted by Kelley at 7:30 PM No comments:
Labels: life, soccer, working

Our Life This Week

It's been a slow week around here. Melissa and Benjamin had the state testing at school for four days, so they had no homework this week. (Testing means no sub work for me.) While Melissa still had art Tuesday afternoon, Ben's soccer game was cancelled Thursday night due to the fields being too wet.  We got a ton of rain Wednesday evening that went all through the night. I wasn't surprised at all the game was cancelled.

The fields are, also, used by the highs school teams and they are want to keep them in good condition. As a parent of a high school player - I totally appreciate that! If the school put some money into the football field, we could use that, but that will not happen, I think. Which is too bad...if we did, our team would be able to keep the gate money (there's a fee for all to attend). This area is still a football area with soccer the red-headed step-child. Maybe in a few years it'll be different.

Ben's team has been a surprise - they are good! This is the first time in several seasons there has been enough players in the 12 -to 14 years olds to have enough teams. Last season they put the few 12-14 year olds in with the 9-11  - so it became 9-14 years old. But we have enough for four teams this year. Our first game was two Thursdays ago - and it was cancelled due to rain. Last Saturday we won 7-0 and today we won 6-0. We have about three or four players that are really good!! I absolutely look forward to the years when they are playing for the high school!!  I see the high school team being amazing!

Of course, the down side to playing with 12-14 years old (aka - The Big Boys), Benjamin gets run over. He's so small....but he has a great time playing. Since there's only one extra player, Benjamin (and all the boys) get lots of playing time.  The other down size is he is now playing on a field the same size as the high school team. Needless to say, he very tired at the end of each game! This, also, means he needs to run and get in shape!!

My parents came to stay the night yesterday. Mom, Melissa and I got some shopping in.....all got to watch Ben's game.....even a Scrabble game in....just a nice lazy time.

William took the ACT again today. He did very well last year, but we are hoping for a higher score so he can get even better scholarship offers. It'll be a month or so before we get the results.

Tomorrow we have a full day at church....normal services with dinner on the grounds (crawfish!!). Then later in the afternoon we have our turn for outreach/visitation, then the monthly marriage class.
Posted by Kelley at 5:01 PM No comments:
Labels: kids, life, soccer

I have never crashed a party....until last night that is....Drew and I didn't mean to....but we did. Good news is we did not get thrown out. Of course, that would have been interesting if we had...

It all started a few weeks ago when I got a facebook message from a friend in Mississippi letting us know that her son, Matt, (whom is, also, a friend) would be preforming at a local restaurant in case we would like to attend. I added it to my calendar and made a date with my hubby. We both thought it would be great fun! We even invited some friends to join in with us.

Oh, well. You can only go on what you know at the time you know.

So, Drew and I along with our friends, got to the restaurant. I had never been to this restaurant before and so didn't know how it was set up. Turns out there's a long private room behind the bar...and that was where Matt was preforming...in a private room....at a private party...

Oh, well. We went in anyway. And made our way to the front - with several people looking at us with that look in there eye of "who are you and why are you here??"

I ended up going  back to our friends to get a table and to order some food. (Hello! It was after 6:30 by this point - I was hungry!!) Drew stayed and listened to Matt until our food arrived (love texting!).

After we ate we all went back into the private party (crashers again) and listened to several songs. Our friends left after awhile, but Drew and I stayed until the end to get moment to talk to Matt. Such fun!

Matt and his family has friends with Drew's family since they were all kids. Matt has always had a love for music and has pursed it on the side for years. Last year he won a  songwriting contest and has since gotten a record deal with Jimmy Buffet. It's been fun watching from the sidelines as someone has attained his dreams and living them out.

I just  didn't expect to be crashing a private party in the process.... 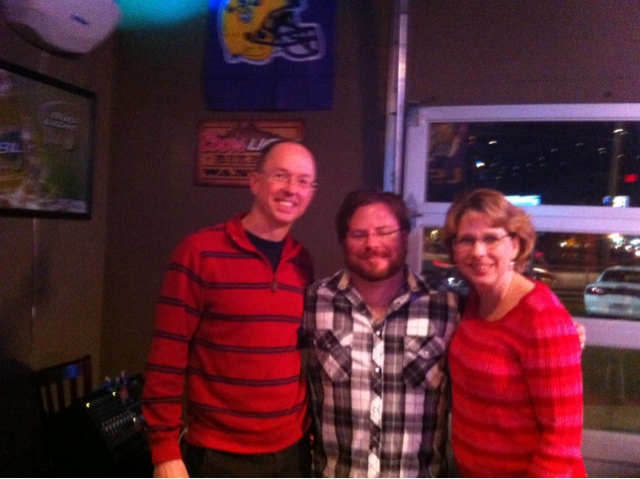 Posted by Kelley at 11:24 AM No comments:
Labels: life, odd events

The Stress of Tests

For the last two days Melissa has come home stressed. Oh, she's fine when she walks in the door, but when she realizes what she needs to do (homework, chores, practice piano), she falls apart.

Yesterday I thought it has more to do with her NOT wanting to practice piano (nothing new), but today she talked about how all her teachers were telling them to study for THE TEST next week.

It's called LEAP and iLEAP(depending on the grade you're in) here in Lou-zee-ana. And the teachers are STRESSED as well.  This year it's a brand new test. They (the state's experts) did all sorts of changes. Along with the changes, the teachers and schools are being evaluated with the test scores apart of it all.

It all makes my daughter cry.

And have long-lasting cases of the hiccups it seems. (For the last  year she has had a problem with the hiccups....even had testing done...even tried some meds....but nothing made them go away....now even SHE thinks it's stress.)

Next week is the test. I, personally, think she and Benjamin (since William is in high school, he takes a test at the end of the semester for each class - sort of like a final) will do fine. Both are smart and do well in class as well as on test. I just need teachers to BACK OFF!

The wonderful part of traveling for spring break is getting a change of pace....seeing friends and family...having fun!

Then you have to come home and face the never ending chore of laundry. Between yesterday and today I conquered the clothes. Tomorrow I need to take care of sheets and towels.

And bathrooms....and the dust bunnies...they need to be tracked down and taken away.

But getting away for spring break was so worth it!
Posted by Kelley at 9:32 PM No comments:
Labels: life
Newer Posts Older Posts Home
Subscribe to: Posts (Atom)