Well over a month ago ads for a movie called "Dark Shadows" started to air and Melissa & I just laughed over them. Especailly "Are you stoned?" asked by a teen. The response by Johnny Depps charatcer: "They tried to stone me. It did not work," said with an English accent.

We both wanted to see the movie! But then we saw it....

First mistake:  Getting sucked in with ads.

Second mistake: Not doing any research on the movie. I had no clue until afterwards that it was a remake of some old TV show (and based on several friends' comments, a bad TV show at that).

Fourth mistake: Taking my 13-yr old daughter to a movie I did not read the review on.

Yes, I knew it was PG-13 before I went, but I honestly thought it was because of the violence. After all, the main character was  vampire. Vampires kill people - I get that, so, a PG-13 rating was no surprise.
About fifteen mintues into the show, the cussing started. I looked at Melissa and said, "Hmmmm. I think I should have read the review first...."

Then there was a second s*x scene.  This time Melissa knew what was coming - it was time to go!  She said,"I'll leave first  - you follow a few minutes later so it doesn't look like we're walking out."

Sure. Whatever. But I wasn't going to sit through that show with my 13 yr old.

Many times during the beginning of the show several characters talked about the Johnny Depp character, Barnabas Collins, as a "good man" - loyal...family loving.  He talked about finding his "one true love".  But a  good and loyal man doesn't not have s*x with anyone and everyone if  you have a "one true love". I don't want my daughter to think it's okay  to sleep around - even it's you just enjoy it as entertainment - not actually participating yourself.

Once again Hollywood missed the mark.  They had the makings of a good movie! But they added useless language, senseless s*x scene, failed to develop real characters. I should not be surprised.

Hopefully, I won't be making the above mistakes agian.
Posted by Kelley at 9:21 AM No comments:
Labels: movie review

It seems that blogging is getting harder and harder - for many reasons.  Both of our computers are on their last leg and frankly, it's not fun to be on either one at times. Our lap-top no longer recognizes the battery, so it has to be plugged in at all times. It the cord  gets pulled out as you are moving around, it totally shuts down with no warning. No fun at all.

Then finding time to get on the desk-top when the kids and Drew are home is, also, a challenge.  Several All of my kids also like to read over my shoulder while I type. Which I find totally annoying.

But then there's the fact that they are teens now (while Ben may 11 and not 13 -he's still a teen in may ways) I feel like I need to respect their privacy more now than ever. Many times something funny or interesting happens, then one of them will turn to me - "Don't post this on facebook or the blog!"

So, I don't.  They deserve their privacy...and the teen years can be so sensitive.

But I will try to make an attempt to keep posting...even it's it sporadically.
Posted by Kelley at 9:00 AM No comments:
Labels: family, life

One of the first blooms: beautiful! 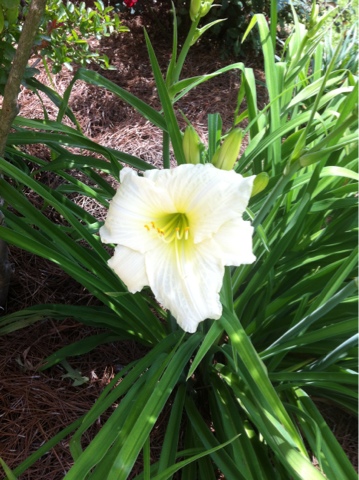 A ruling in our parish has made "senior projects" a requirement to graduation from high school. This morning I sat as a judge for one set of students at a local high school.  What fun! I thought all seven students I saw did a great job! Of course, some better than others...but all had done work and seemed to have learned something along the way - which was the goal.

One girl ended up researching literacy and wrote a children's book - very creative! She also illustrated the book in water colors - she did a great job!

All seven talked about attending college in the fall - several wanted to be doctors....a few were clueless about college major, but all were ready to graduate high school.
Posted by Kelley at 1:54 PM No comments:
Labels: life, odd events
Newer Posts Older Posts Home
Subscribe to: Posts (Atom)